Sometimes the Trinity River is a puny little trickle, sometimes it’s a raging torrent. Here are aerial photos taken from around Forest Avenue (now MLK Blvd.) by Lloyd M. Long, showing the major flooding of May, 1935.

Here is the lead sentence from The Dallas Morning News, May 21, 1935 (the day after these photos were taken):

With sections of South Dallas inundated for the first time since the record 1908 flood, numerous bridges and highways and thousands of acres of lowlands hidden by its swirling, muddy currents, the roaring Trinity slowly was receding Monday night at Dallas after reaching a crest of 42.10 feet at 11 a.m. (DMN, May 21, 1935) 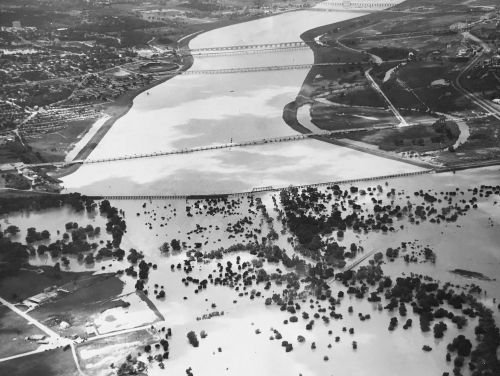 There was great rejoicing that that the new-ish levees had held the waters and prevented the wide-scale flooding seen in 1922. But once you got to the Forest Avenue bridge (which ran below the Corinth St. viaduct and the Santa Fe railroad trestle), things got real bad real fast. In the photo above, the levee protection ends exactly at the railroad trestle — the Forest Avenue bridge is mostly underwater. The river above the trestle: a beautiful feat of engineering; below: water, water everywhere.

Below the Forest Ave. bridge where the levee protection ended, flood conditions were far worse than those created by the 1922 inundation. (DMN, May 21, 1935)

Again, sometimes the Trinity is just a trickle….

Both photos (by Lloyd M. Long) are from 2017 eBay auctions: the top photo here, and the bottom photo here.

More on Dallas flooding can be found in these Flashback Dallas posts:

Maybe it’s just me, but I was really taken with that little L-shaped building in the top photo which was, briefly, its own island. What was it? It was part of the Guiberson Oil Well Specialty Corporation, founded in 1919 at 1000 Forest Avenue — the building seen in the photo was built in 1926. It’s still standing (here) and appears to be part of Faubion & Associates, a manufacturer of retail display cases and store fixtures.