Jonesing for some java? Belly on up… (click for larger image)

You know who was really, really happy about Prohibition? The coffee, tea, and soft drink industries. In fact, they were absolutely giddy.

Have you ever wondered what happened to the nation’s thousands and thousands of bars when it became illegal in the United States to sell alcoholic beverages? What about all the hotel bars? Apparently many hotels renovated their old bars into something new and novel called a “coffee shop” or a “coffee room.”

The photo above shows what the vested interests of The Tea & Coffee Trade Journal deemed the “coffee room” of the elegant Adolphus Hotel.

Yes, there were coffee urns, but it was actually the Adolphus Lunch Room. Though beverages are not mentioned in the menu seen below, it’s interesting to read what dishes were available to the Adolphus visitor in 1919 (of course the really well-heeled guests were not noshing in a lowly —  though quite attractive — “lunch room”). The most expensive item on the menu is the Adolphus Special Sunday Chicken Dinner for 90¢ (which the Inflation Calculator tells us is the equivalent of about $13.00 today). (Click to see a larger image.) 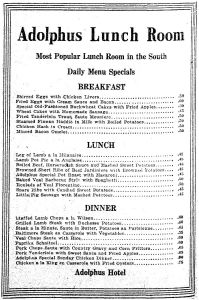 And, yes, I believe that is a spittoon at the register.

Photo from the article “The Renaissance of Tea and Coffee” from The Tea & Coffee Trade Journal (March, 1919). See other photos and read how Prohibition was spurring on this alcohol-free “renaissance” in the article, here.

Photo of the Adolphus barbershop appeared in the book Historic Dallas Hotels by Sam Childers, credited to the Adolphus Archives.

Many, many historical photos of spittoons can be found in this entertaining collection of the once-ubiquitous cuspidor. …Because when else will I be able to link to something like this?

As a sidenote, the Adolphus Hotel was, of course, built by and named for Adolphus Busch, the co-founder of Anheuser-Busch. Mercifully, the beer magnate died pre-Pro — before Prohibition.