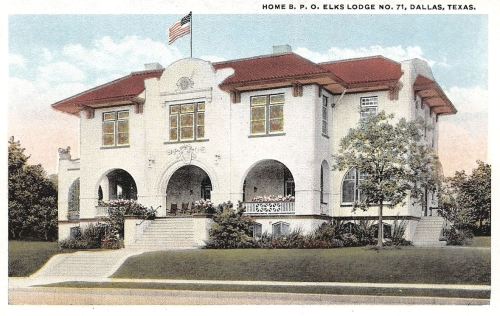 The postcard image above shows the lovely Dallas Elks Lodge No. 71 which once stood at 1817 Pocahontas, at the northwest corner of Pocahontas Street and Park Avenue in the Cedars area, just south of downtown — it had a spectacular view of City Park, which it faced.  Designed by architect H. A. Overbeck (the man behind the still-standing Dallas County Jail and Criminal Courts Building and the long-gone St. Paul’s Sanitarium), the lodge was built in 1914; the land and the construction of the lodge cost $45,000. Surprisingly, this lodge served the Elks for only six years — they returned downtown, where they took over and renovated the old YWCA building on Commerce Street.

The building on Pocahontas became another clubhouse when it was purchased in 1920 by a group of Jewish businessmen who opened the exclusive Progress Club/Parkview Club (read about the building’s acquisition in a May 14, 1920 article in The Jewish Monitor, here); in 1922 the 65 members of the Parkview Club presented the clubhouse to the Young Men’s Hebrew Association (YMHA). In 1927, use of the building had expanded, and it became the Dallas Jewish Community Center and the headquarters of the Jewish Welfare Federation — in fact, this was the home for these organizations for more than thirty years, until 1958 when the move was made to the new Julius Schepps Community Center in North Dallas. The building ultimately fell victim to the construction of R. L. Thornton Freeway and was demolished in the early 1960s.

But back to the Elks. The Benevolent and Protective Order of Elks was a social club/fraternal order founded in New York in 1868. Dallas Lodge No. 71 was chartered on January 28, 1888 — it was the first Elks Lodge in Texas and one of the oldest clubs in Dallas. And, after 130 years, it’s still around, now located in Lake Highlands. There aren’t a lot of things that have lasted that long in this city!

Below, the Overbeck rendering of the Elks’ new home (click for larger image) 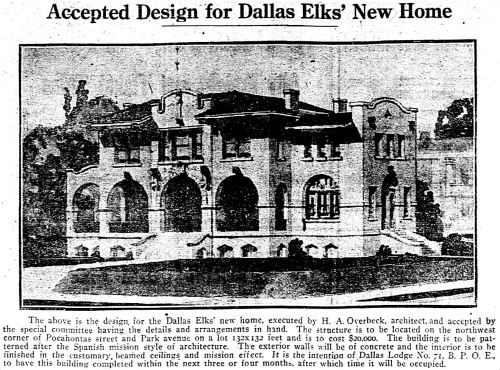 Colorized and made into an attractive postcard:

In the 1930s, when it was the Jewish Community Center:

The announcement of plans for the construction of the Pocahontas Street lodge:

Source of postcards unknown. Other images and clippings as noted.

The 1888 report of the first meeting of the Dallas Elks Lodge No. 71 can be read in the Dallas Morning News article “Order of Elks in Dallas; A Lodge Instituted Here Yesterday” (DMN, Jan. 29, 1888), here.