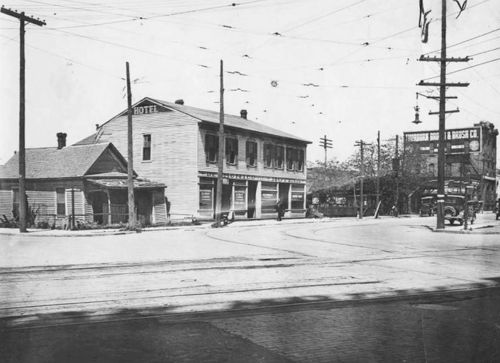 How does one refer to the area just above Pacific and Central, where Swiss once crossed Central? “Deep Ellum-adjacent”? “Far North Deep Ellum”? The “Extreme Western Edge of Old East Dallas”? It was very close to the old union railroad depot, where the T&P and H&TC tracks crossed (about where Pacific and Central crossed). It was once a bustling area, but after the depot closed in the ‘teens, it didn’t bustle so much anymore.

The photo above — looking to the northeast and taken about 1918 or 1919 — shows the Delmonico Hotel (at 2309-2311 Swiss Avenue) and, to the right, the Thorburn Broom & Brush Co. factory (2405-2409 Swiss). (See the Swiss Avenue occupants of these two blocks as listed in the 1919 Dallas directory here.) The street that runs between the two blocks is Central Ave. The railroad tracks running horizontally at the bottom of the photo run along Pacific, and the streetcar tracks curve up and to the right to run along Swiss.

The Delmonico Hotel was at this location for only a couple of years until it moved a block around the corner, facing Central — the new, larger “Greater” Delmonico opened in July, 1919, occupying the upper floor at 302 Central. The proprietress of both locations was Miss Mary Howard (later Mrs. L. O. Clark). Miss Howard was, apparently, an enterprising African American woman who ran what was described in Dallas’ premiere black newspaper as “the largest and most commodious hotel for Colored in Texas… [catering] to first class trade” (Dallas Express, July 5, 1919). It remained in business at its second location on Central Ave. until 1927 or 1928. 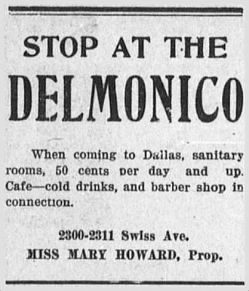 Above, an ad for the hotel’s first location (the address should read “2309-2311 Swiss”). Below, a nice article on the opening of the second location on Central. 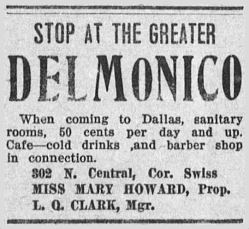 It’s interesting that the 1919 Dallas directory has a business listing for this hotel (the first location, the one seen in the photo) — it is the sole hotel for “colored” patrons listed (denoted with the letter “c” — you can see the list of hotels from the 1919 directory here).

The first location can be seen in this detail of a 1921 Sanborn map, circled in black; the second location is circled in blue; the Thorburn Co. broom factory at Swiss and Central is labeled. (All images are larger when clicked.) 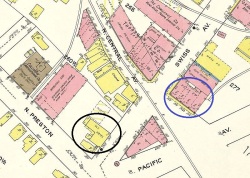 The 2300 block of Swiss is no longer there — it is now empty land beneath the elevated North Central Expressway. The 2400 block (where the broom factory stood) is still there and is the site of a self-storage business (the Thorburn factory once stood here, across from the Lizard Lounge).

The large white building housing the Delmonico appears to have been built in 1889 by Swiss-born John Jacob (“J. J.”) Yost, who soon opened the Bear Hotel, which seems to have been a popular rooming house/hotel for German immigrants. By 1902 Yost was looking for a buyer for the hotel (“with saloon”) and placed the ad seen below (an ad which appeared not too long after a court notice appeared in the papers showing  that Yost had been found guilty of operating a “disorderly house” (a brothel) and had been fined $200, which was a huge fine at the time).

As Yost described it, the hotel really was in “a fine location” — just a block or two from a very busy passenger-train depot. Perhaps he was asking too much for it, but the Bear Hotel appears to have remained in operation until 1906, when it became the International Hotel (which was in business until 1918 when the hotel became the Delmonico, the first of these hotels to be owned by an African American for a strictly black (segregated) clientele). Below is an amusing (or terrifying) news tidbit from 1909 about a guest at the International Hotel. When you find yourself asking “what did people do before air-conditioning?” remember what happened to poor Fritz Brockmann: 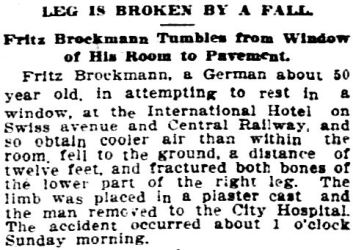 The Thorburn Broom & Brush Co. manufactured … brooms and brushes in their factory seen at the right in the photo above. A few bristly factoids about the company were included in a Chamber of Commerce-like series of ads from 1922. 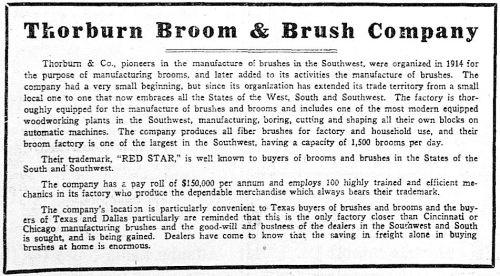 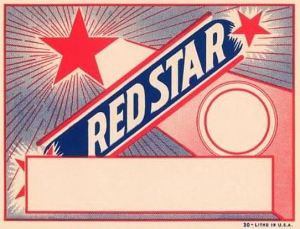 Top photo — titled “[Swiss Avenue at Central and the Houston and Texas Central Tracks]” — is attributed to George A. McAfee and is from the DeGolyer Library, SMU Libraries, Southern Methodist University; more information on this photo may be found here.

More info about the old Union Depot — which was one block south from the location seen in the photo above — can be found in these Flashback Dallas posts: