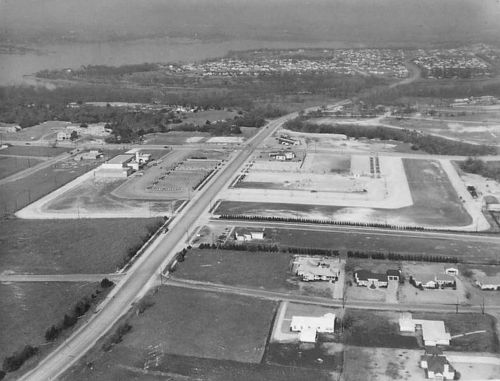 Here are two fantastic aerial photos showing the Casa Linda area east of White Rock Lake. The one above shows the very early days of development of the Casa Linda Plaza shopping district. The first building was the Casa Linda Theater, which opened on August 9, 1945 (the grand opening feature was “The Affairs of Susan” starring Joan Fontaine and George Brent). The theater (now Natural Grocers) can be seen at the middle left. Buckner Boulevard (Loop 12) runs diagonally in this photo, from the lower left to the top right; Garland Road runs horizontally just above the theater. The then-new Fire Station #31 (which opened in the summer of 1947 and is still in service) can be seen on Garland Road, above and to the left of the theater. (See this same view in a current aerial view from Google here.)

Also visible in the above photo is the sorely-missed Pegasus-topped service station at the corner of Garland Rd. and Buckner.

Below, a view from the other direction — this time looking toward the southeast. This aerial photo was taken by Lloyd M. Long in 1941. Carl M. Brown, the developer of Casa Linda, had already begun turning farmland into a new residential neighborhood — the shopping center was still years away. The land which would eventually become Casa Linda Plaza can be seen just left of the center of this photo — Garland Road can be seen running from the lower right to the upper left (from East Dallas toward the city of Garland). (To get your bearings, see a “labeled” version of this photo from SMU’s Edwin J. Foscue Map Library, here.)

Top photo was posted in the “Dallas History (Before 1960)” Facebook group. The person who posted the photo gave the date as March, 1945, which seems incorrect, as the fire station was not built until 1947.

The second aerial photo, “Casa Linda and Vicinity, Dallas, Texas, Looking S.E. from 9,500′ (unlabeled),” was taken by Lloyd M. Long on March 1, 1941; it is from the Edwin J. Foscue Map Library, SMU Libraries, Southern Methodist University and can be accessed here. (The “labeled” version can be found here.)

Read an extremely enthusiastic profile of Carl M. Brown and his Casa Linda dreams in a 1953 “Story of Free Enterprise” article here.