The liquidation of Luby’s restaurants was announced this week. There are a lot of people (Texans in particular) who are going to take this news hard.

I spotted the Luby’s seen in the picture above in a photo I found on eBay a few years ago (see the full photo here). I was surprised to learn that the first Luby’s in Dallas opened in 1929. (I think it was the first Luby’s in Texas — there might have been a tangentially-related “Luby’s”-branded restaurant in Muskogee, Oklahoma, but let’s just say that the Luby’s at 205 Browder Street in downtown Dallas was the first one in Texas. It was opened by Earl E. Luby on January 8, 1929. 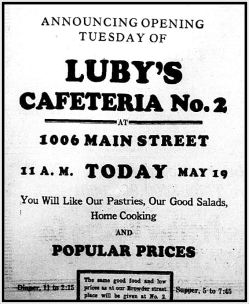 Earl Luby was the first cousin of Harry M. Luby, the man who is generally considered to have opened the forerunner of what we now know as Luby’s. In September, 1911, Harry opened a cafeteria in Springfield, Missouri called New England Dairy Lunch — there were several other restaurants around the U.S. with the same name, so I’m not sure if he bought it as a franchise, but whatever the case, that cafeteria was the start of a tray-toting empire.

He opened other New England cafeterias in Missouri and, with cousin Earl, in Oklahoma. (There was one in Dallas in 1919, located at 1409 Elm, which appears to be connected to the Luby family.)

In 1929 Earl branched off, moved to Texas, opened his own cafeterias (mostly in Dallas), and made a fortune. (There were Luby’s cafeterias run by other members of the Luby family, most notably Harry’s son, Robert Luby, who was active in South Texas a few decades later. I don’t know whether these were two completely different business entities, but Earl was king of the very lucrative Dallas market.)

Here’s an ad from 1953 with Luby’s locations at that time (along with a Miss Inez shout-out). (Click to see a larger image.)

And from the same ad, a photo of cousins Earl and Harry enjoying a convivial cup of coffee.

And, below, a 1960 ad for the new Luby’s at the Preston Forest Shopping Center (that sign is fantastic!).

More on the history of Luby’s (with some incorrect information and nary a mention of Earl!) can be found on Wikipedia and The Handbook of Texas.