Behold, the Koneman Millinery Establishment, which actually looks a little plain for a millinery shop housed in the ornate Oriental Hotel building. When I see old ads or photos like this, I always wonder about the people pictured in them. I’m assuming that the woman in the oval inset at the left was the proprietess, “Mme. Koneman.” So who WAS she, this woman who had a “high-class” business that catered to a “high-class” clientele? I poked around a little and found these ads from 1913. 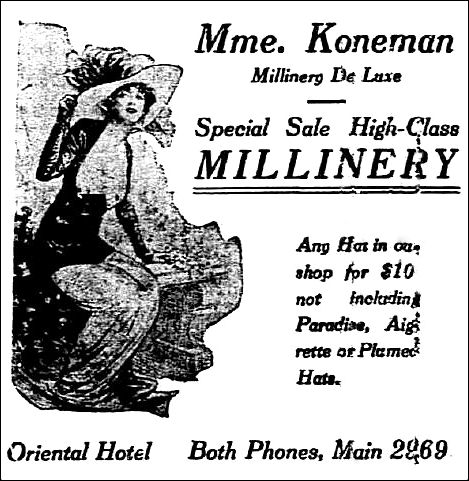 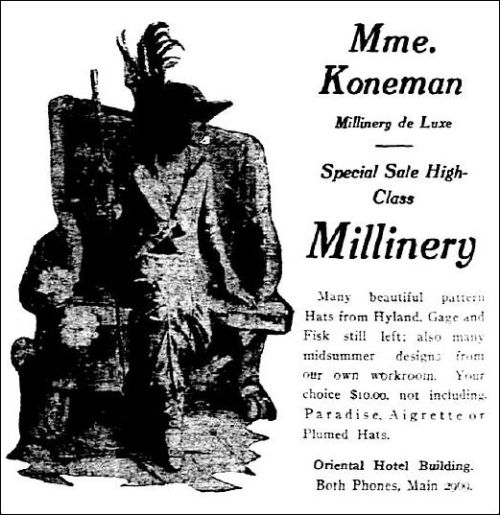 Ooh. Those last few sentences of the above ad seem a little defensive, as if she’s addressing nasty gossip. “Furthermore, I want to say that I am not going out of business.” When you see a sentence like that — in an advertisement — that sends up some furiously waving red flags. And … just one month after that ad, this miniscule tidbit in teeny-tiny letters appeared in the paper at the end of 1913:

Oh dear. D-I-V-O-R-C-E. And, guess what? There were no more ads for the millinery shop.

But, alarmingly, THIS appeared on the wire services on February 17, 1917:

Oh DEAR! Shot by a widower with two children, who tried to kill both her and himself after he flew into a jealous rage in a New Orleans hotel lobby. Working with feathers and plumes and felt and velvet (probably) does not prepare one for being shot at!

Ten days after being shot, it was reported that the 36-year old Mrs. Koneman (whose first name was either “Matilda” or “Mathilda”) was released from the hospital in New Orleans. The jealous suitor, 40-year old Edgar J. Hargrave (or “Hargrove”), remained in the hospital, slowly recovering (but with a bullet still lodged in his head!). “Policemen expect to arrest Hargrave on a charge of shooting with intent to murder as soon as he is able to leave the institution.” He was an “oil salesman” from Houston.

One week later, Hargrave/Hargrove was released from the hospital and was transferred to Parish Prison where he awaited arraignment on attempted murder. Meanwhile, Matilda/Mathilda, a material witness in the case, had been arrested when the D.A. heard she was about to leave town. Out on a $650 bond, she was ordered to stay in the city until the arraignment.

On March 16, one month after being shot in the lobby of the Grunewald Hotel, Mrs. Koneman was in court recounting her near-death experience, and I’m sure the people back in Dallas were eating up every last morsel in the scandalous testimony about the spurned lover who tried to kill the divorcée who used to sell them great big hats with aigrette plumes in that bleakly unadorned hat shop over on Ervay!

(UPDATE: A reader kindly forwarded me a more detailed account of the shooting incident between the spurner and the spurnee, in a longer article from the New Orleans Times-Picayune (Feb. 17, 1917). Click here to read the article, with a blurry photo of Hargrave.)

And then — rather anticlimactically — the trail ran cold. What was the verdict? What happened to Edgar? Whither Mme. Koneman? Mrs. Koneman was reported to be living in Galveston at the time of the shooting, but by the summer of 1922 she was back in Dallas, checked into the Southland Hotel. The last shred of info I found about her was this classified ad from June, 1922, which raises even more questions.

I’m not really sure what this was all about, but it’s safe to say there would have been very few lags in the conversation between Dallas and California!

“Dallas Woman Shot” article from the Fort Worth Star-Telegram, Feb. 17, 1917. This was a wire service story that was printed around the country, but, oddly enough, the news doesn’t seem to have made its way into the DMN until ten days after the shooting!

All other ads and articles from the Dallas Morning News. The Koneman Millinery ads were from 1913.