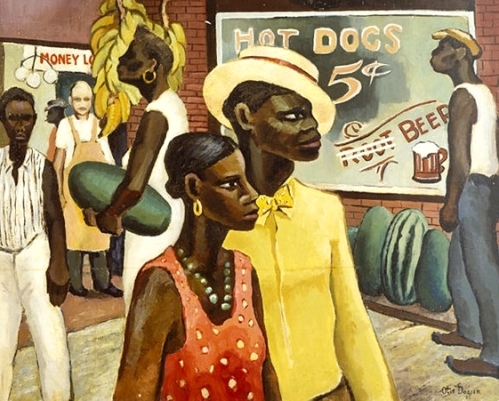 “Deep Ellum Blues” has become a standard blues song, warning of/extolling the vices found in the once-thriving, predominantly black area of town, where a lot of people — black and white — enjoyed themselves (after dark) in clubs and bars, immersed in the sometimes shady goings-on that one tends to find on the other side of the tracks. The song (sometimes irritatingly called “Deep Elem Blues”) was first recorded in 1935 by the Lone Star Cowboys (popular performers in the Dallas area, better known as the Shelton Brothers). And now it’s become a blues standard, sung around the world by people who have no idea what a “Deep Ellum” is.

Below are four versions of the song that I like. (I searched for early performances by black musicians, but, according to Deep Ellum experts Alan Govenar and Jay Brakefield, there is only one that anyone seems to know about — by Booker Pittman, grandson of Booker T. Washington, and I couldn’t find it.)

But first, if you haven’t seen this wonderful short documentary by Alan Govenar about Deep Ellum in its original prime, it’s a must-see. (Bill Neely sings “Deep Ellum Blues” in this — it’s great. Listen for the extra verses.)

Below, the original version by the Lone Star Cowboys, who later changed their name to  The Shelton Brothers and were well-known to Dallas audiences through their regular appearances at the Big D Jamboree and on local radio (in a video conveniently uploaded just this week!).

I can’t leave off this turbo-charged rockabilly version by Dallas’ own “Groovey” Joe Poovey!

And, finally, for good measure, one weird version, by the always reliable Charlie Feathers.

Remember y’all: KEEP YOUR MONEY IN YOUR SHOE!

For more on the history of Deep Ellum, I highly recommend Deep Ellum and Central Track, Where the Black and White Worlds of Dallas Converged by Alan B. Govenar and Jay F. Brakefield (Denton: UNT Press, 1998), as well as their recent revised/expanded book Deep Ellum, The Other Side of Dallas (College Station: Texas A & M University Press, 2013). Govenar and Brakefield have written the definitive history of Deep Ellum in these two volumes. You can read a bit about the song from the latter book here.

I wrote about another interesting song, “Dallas Blues” — considered by many to  be the first blues song ever published — in the post “I’ve Got the Dallas Blues and Main Street Heart Disease,” here.