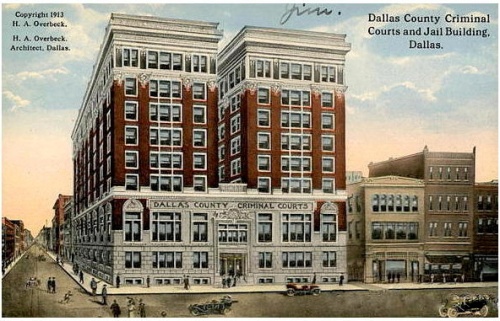 Admit it — that picture above is probably the most attractive jailhouse you’ve ever seen. The first couple of floors were devoted to the courtrooms and administration offices of Dallas’ criminal courts system, but this was primarily the county jail, designed by Dallas architect H.A. Overbeck. Still standing, it faces the Old Red Courthouse (Main St. is in the foreground of the picture above, Houston St. is at the left) — it was even built with a tunnel connecting the two buildings. I’ve always liked this building, but for some reason it’s weird to think of it as a jailhouse. It’s hosted celebrity outlaws like Clyde Barrow and Raymond Hamilton, Benny Binion, and Billie Sol Estes, but  its main claim to fame is its connection to the Kennedy assassination: not only was Jack Ruby tried in one of the downstairs courtrooms for the murder of Lee Harvey Oswald (whom he shot while Oswald was in the process of being transferred to the county jail), but, as a reader notes in the comments, Ruby also spent considerable time there upstairs, as a prisoner, incarcerated in a cell overlooking Dealey Plaza.

When this building opened in 1915, it was a veritable showplace — one of the country’s most modern (and attractive) jails. Here’s what it offered:

“This building, representing an entirely new type of building for the administration of justice in prison architecture in this country, was designed by H.A. Overbeck, architect, Dallas, after making a study of all modern architecture of this nature hitherto built in this country. It will cost approximately $550,000. It has the character of a modern business administration building of the skyscraper type in the Italian Renaissance style. The building is eleven stories high with deep basement and tunnel connecting with old courthouse. It is absolutely fireproof in construction with reinforced concrete skeleton frame. The base is red granite. The first story is rusticated buff granite terra cotta and the same material is used for the trimming throughout. The walls above are red velvet brick. The basement has complete heating and ventilating plant with air washing equipment, also complete power plant. Two stories are devoted to the Dallas County criminal courts and justice courts, with rooms pertaining thereto. Two floors are occupied by the women’s cell rooms, matron’s apartments, hospital and work rooms. There are two main cell rooms for men: the races being segregated. There will be accommodations for about 500 prisoners. All cells are of the most modern type and construction of tool-proof steel, specially designed sanitary plumbing fixtures in each cell, forced ventilation – the air being washed and filtered and tempered to a uniform temperature. Special designed electric lighting, Watchman’s clock signal and telephone systems. Four electric prison elevators especially designed for this building. Ample provision for insane prisoners in special quarters, with padded cells for violent prisoners.” (Texas Trade Review and Industrial Record, March1, 1915)

(When you go to architecture school you probably don’t envision designing a building with padded cells and “ample provision for insane prisoners.”)

The building will celebrate its 100th anniversary next year. With any luck, by then work will have begun on its much-needed restoration. 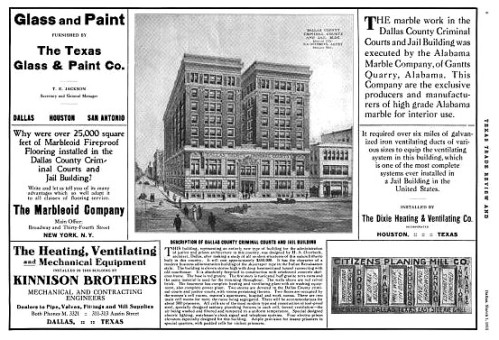 For a perhaps easier-to-read view of the ad from The Texas Trade Review and Industrial Record, see it here.

For an interesting article on a push for the building’s restoration — and to see tons of photographs taken inside the deteriorating jail and courtrooms — check out “Old Courthouse, Jail a Fading Bit of Dallas Lore” by Tom Benning (Dallas Morning News, May 13, 2014), here.