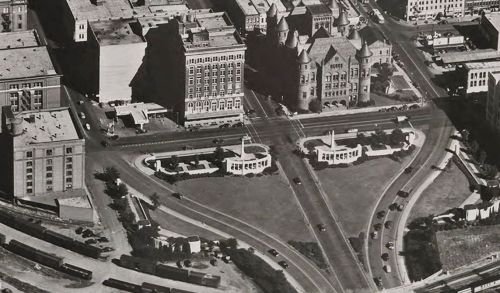 There was a time when gas stations populated the central business district in downtown Dallas. But now? I’m not sure I’ve ever seen a gas station in the heart of downtown. Which is probably why the station seen above (from a detail of a larger aerial view of downtown) stood out so much when I was looking at the photo. And it wasn’t located just anywhere downtown, but it was in the primo location opposite Dealey Plaza at the “gateway” to the city. It doesn’t fit in that space very well — it’s a corner crying out for a more substantial structure — but … wouldn’t it be nice to have an actual full-service gas station downtown again?

The Tyler Service Station (and before that the Longhorn Service Station) held down the corner at Elm and Houston streets in the 1940s but was demolished in 1953 to make way for the construction of the Records Building/Criminal Courts Building annex. And, hallelujah, I found a photo of the service station from ground-level — and it was pretty cool-looking! 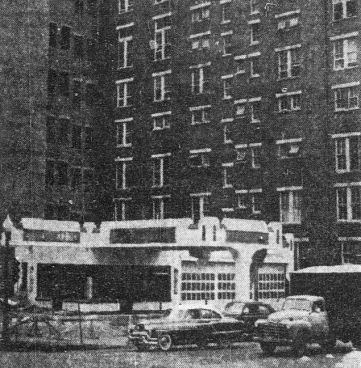 And, finally, here’s the original photo I saw in which that long-gone gas station jumped out at me, another wonderful photo by Lloyd M. Long, taken in May, 1949. You never know what odd things you’ll discover if you just take the time to explore.