I originally thought the street in front of Baylor Hospital in this postcard was Gaston. But Baylor originally faced Junius Street (see it on a 1921 Sanborn map here), and, in fact, its address was 3315 Junius for many years. I had no idea.

Below are a few more photos and postcards of the medical facility which eventually grew into Baylor Hospital (its Dallas roots go back to 1903, but the buildings seen in these images — buildings designed by noted Dallas architect C. W. Bulger & Co. — were built around 1909). Originally known as the “Texas Baptist Memorial Sanitarium,” it changed its name to the more familiar “Baylor Hospital” in 1920/1921 (and later became “Baylor University Hospital” in 1936). (More on the timeline of Baylor Hospital can be found here and here.) 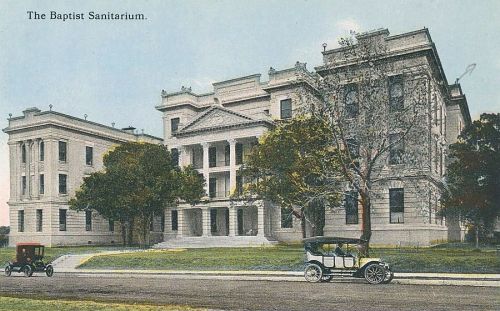 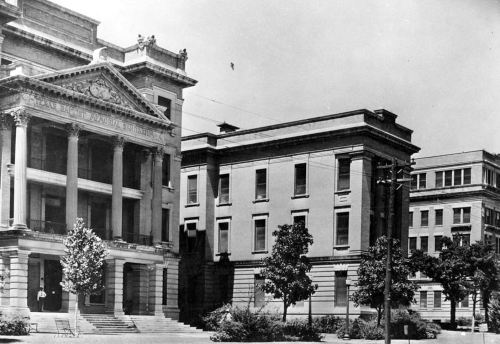 This is my favorite one: no cars, but there’s a horse grazing at the entrance!

The postcard below was postmarked 1909, the year these new buildings opened. No cars, no horse, no people. 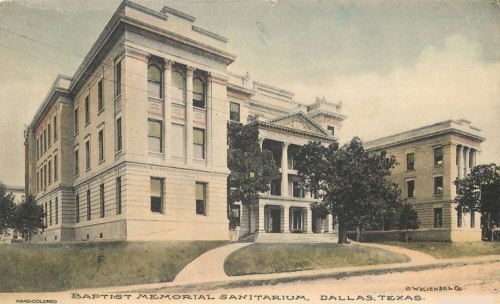 And here is the brand new sanitarium, in a photograph that appeared in The Dallas Morning News less than a month after its official opening.

The first black-and-white photo is from the 1917 Round-Up, the yearbook of Baylor University in Waco; the same image (uncolorized) appears in the digital archives of UT Southwestern, here, with the date 1915.

The second black-and-white photo is from the UT Southwestern Library archives, here.

The name-change of the Texas Baptist Memorial Sanitarium to Baylor Hospital was proposed in Nov. of 1920 and formally approved by the Board of Trustees of Baylor University in Waco on January 16, 1921. More about the major changes happening to the medical facility/facilities affected can be found in the article “Medical Center For Dallas Is Authorized by Texas Baptists” by Silliman Evans (Fort Worth Star-Telegram, Nov. 13, 1920), here.