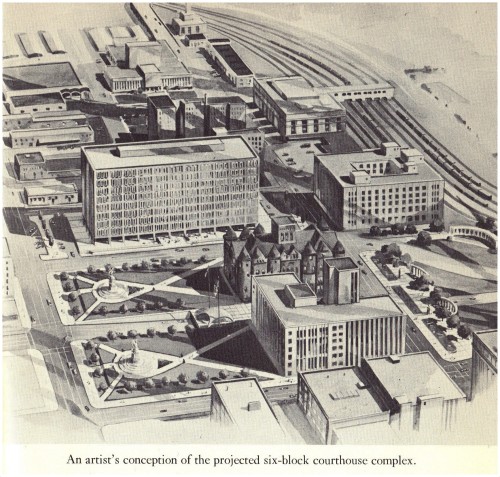 Let’s all be thankful that the Old Red Courthouse is still with us, because there was serious talk in the ’50s and ’60s of razing it to make way for a more modern downtown and a more efficient use of space. Lon Tinkle wrote the following in the mid-’60s: 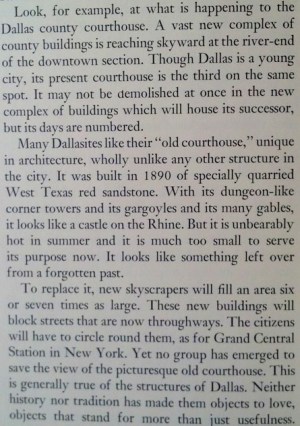 Tinkle’s next paragraph: “It is not that Dallas doesn’t care. It does. But it has to grow into this experience of great cities, and it will.”

Here’s what the eastern boundary of the “courthouse complex” looked like in 1964. (Incidentally, the first Kennedy memorial site was chosen in April, 1964, and it was to be in the block immediately to the east of the Records Building, the one seen in the center of this photo. Sometime in the next few months, the location was changed to the block immediately east of the Old Red Courthouse.) 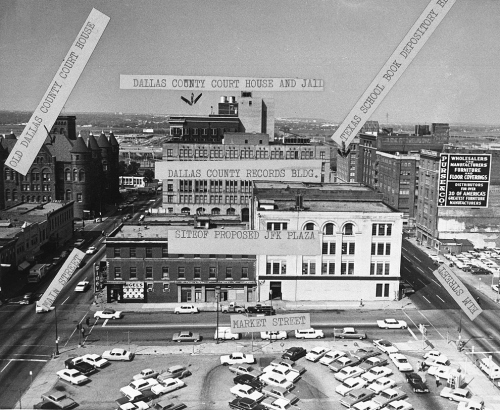 Here’s what the southern boundary looked like when construction of the new Dallas County Courthouse began in the spring of 1963:

And here’s the “complex” today. 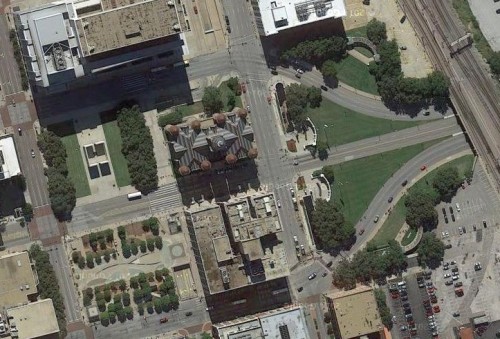 UPDATE: After posting this on the Flashback Dallas Facebook page, a person commented about having worked across the street during the new courthouse’s construction.

On the night of June 19, 1964, a massive fire broke out on the upper floors of the new courts building, which was then under construction. There were 130 firefighters and more than 30 pieces of equipment on the scene according to newspaper accounts. The commenter wrote the following, in clipped sentences, telegram-style:

“I started to work 1963 at Terminal Annex. The Court House under construction, razed by fire shortly thereafter, heat from fire made us work away from windows. There was no thought of leaving building as mail had to make connections to railroads.”

First thing: Wow. The postal creed in action. Wonder if the workers got hazard pay? Or at least a W.C. Fields “hearty handclasp.”

Secondly: I had never seen the phrase “razed by fire” before. It’s not really accurate here, because only the upper floors were destroyed, but the cinematic quality of the phrase is pretty cool. I’ll have to file the phrase away to be used as the title for my memoirs, even if it doesn’t really apply to anything I’ve ever done or experienced. Can’t sacrifice a good title.

Thirdly: I continue to realize just how exceedingly dull my life is.

Top image and text is from Lon Tinkle’s wonderful The Key to Dallas (Philadelphia/New York: J. B. Lippincott Co., 1965), an extremely informative book for young people.

Labeled image of the area in question, looking west, is an Associated Press photo by Ferd Kaufman, taken in 1964. I used this previously in the post “Where To Put That Kennedy Memorial? — 1964.”

Aerial view is a current one, from Google Maps.