Despite its grainy quality, I really like this photo. It shows people walking past the Roseland Theater at 1613 Main Street, a theater I’d never heard of. I couldn’t find out much about it other than that it doesn’t seem to have lasted very long (from at least 1914 until at least 1916). It was owned/managed by P. G. Cameron, who ran several theaters and was in the general “amusements” business around town (he had run the Fair Grounds Skating Rink back in the aughts for a short while, until the place was shut down because of the discovery of a prostitution operation being conducted there … on city-owned property). 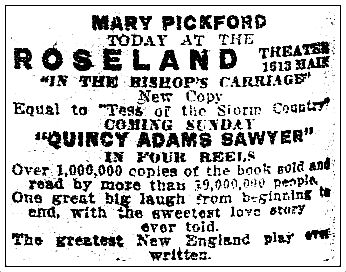 In 1916, the north side of Main Street contained three theaters: the Nickelodeon (1607 Main), the Roseland (1613 Main), and the Best (1615 Main). This is the much-beleaguered (and now mostly demolished) block of Main, which in 1916 was anchored by the dazzling Praetorian and Wilson buildings. The Roseland occupied part of what was once the Everts Jewelers building. Below, another view of this block in 1916, with the theater(s) on the right, about halfway between the tall white Praetorian Building and the stately rounded Wilson Building.

I like this Roseland photo because it’s a candid shot taken by a teenager on the sidewalk of a lively downtown Dallas who had happened upon his teacher away from school. And the sign is cool. Too bad it’s so hard to see.

Photo from the 1916 Terrillian, the Terrill School yearbook. (The caption for the photo of one of the school’s teachers: “Passing by or coming out, Mr. F.?”)

Photo of Main Street, looking west, from the 1916 Rotunda, the yearbook of SMU.

See what the 1600 block of Main looked like in 1909, here. Much of the block has been demolished.

Below, a recent (2015) Google Street View of the building that housed the Roseland: the really lovely shorter white building. This building may already have been razed. What a shame. (UPDATE — 2018: Yep, demolished.) The current view (as I assume this block is ever-changing) can be seen on Google Street View here. 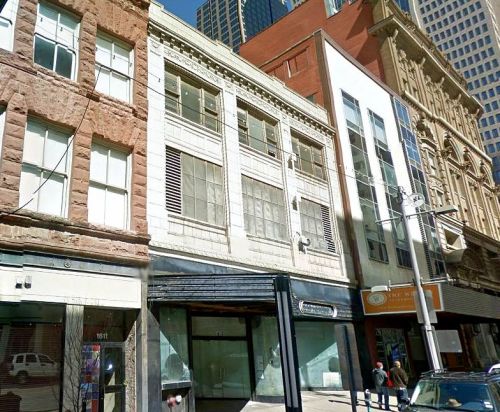