Schlitz on its way…

The carhop is an oddly American invention — and it began here in Dallas in the 1920s, with boys and young men serving customers in cars at J. G. Kirby’s Pig Stand drive-in restaurants. In 1940, Sivils hit Dallas, but this time with young women as servers — young women in skimpy outfits. There was no looking back — from then on, pretty girls showing a lot of leg and hoping for big tips carried trays of food, soft drinks, and beer to cars full of waiting customers.

One of the few remaining “old school” drive-ins is Keller’s, on Northwest Highway, still doing good business today. Around 1974 or 1975, SMU film teacher Pat Korman made a short documentary about Dallas carhops past and present (perhaps as the result of reading a Dallas Morning News article by Rena Pederson — reproduced below). He interviewed B. J. Kirby (owner of Kirby’s steakhouse on Lower Greenville and son of Jesse Kirby, founder of the Pig Stand pig-sandwich empire), J. D. Sivils (owner of Sivils drive-ins, who, along with his wife, was an important figure in the evolution of curb-side dining), and Jack Keller (owner of Keller’s Hamburgers). The three businessmen reminisce about the early days of drive-in restaurants in Dallas as a lot of cool historical film footage unspools and photographs from the ’20s to the ’50s are flashed on the screen. Also interviewed are four women carhops who were working at Keller’s at the time, talking about their jobs.

The 14-minute film is in two parts on YouTube. Here is the first part:

*
And here is the second part:

*
Below, screenshots of the interviewees (click pictures for larger images). 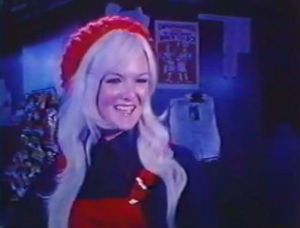 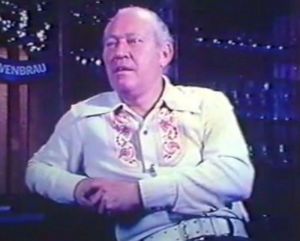 “Carhops” — filmed sometime in the early ’70s — was directed by Patrick Korman, shot by Ron Judkins, and produced by Don Pasquella. It premiered at Jesuit High School in April, 1976. The film is on YouTube in two parts, here and here. (By the way, if you look at the YouTube comments under part two, you’ll see a comment from Sandy herself. She’s still looking good in the avatar photo.) (The music at the beginning and end of the film is great! I’m pretty sure it’s the legendary steel guitarist Ralph Mooney and the equally legendary guitarist James Burton; I love those guys! Listen to the album they did together, here.)

Rena Pederson is thanked in the credits. She wrote an article in The Dallas Morning News called “Carhops Fading, Those Were the Days” (Aug. 25, 1974) in which she interviewed many of the same people seen in the film.

The Keller’s Northwest Highway location celebrates its 50th anniversary this year. Shirley — one of the carhops featured in the film — has worked there since it opened in 1965. As of Jan. 2015, she was still there! Go by and see her! Check out a Lakewood Advocate story on Shirley, here.

Also, take a look at a Dallas Morning News article on Keller’s 50th anniversary, here — scroll down to the slideshow to check out some great photos from its early days.

Read about sexy male carhops who plied their trade in skimpy outfits — a short-lived fad in Dallas inspired by the success of drive-ins like Sivils — in my previous post “Carhops as Sex Symbols — 1940,” here.

All pictures larger when clicked.