Above, the Palace Theater, one of Dallas’ great moviehouses. It opened in June, 1921, near the northwest corner of Elm and Ervay; this photograph is from March of 1926, three months before the theater’s fifth birthday. It was still a whippersnapper.

Below, a detail from the photo: by zooming in and tweaking the contrast, the box office is revealed, as are two women chatting in the shadows (all pictures and clippings are larger when clicked).

As interesting as old movie theaters are, I was more intrigued by the three people to the right of the theater (who all look like characters from a period melodrama) and by the business next door. I’ll never know who those men were or who that woman was waiting for, but finding out what business was selling baby chicks (…next door to the Palace?) was pretty easy.

The store was Lone Star Seed & Floral (1627 Elm). They sold seeds and flowers, potted plants, canaries, goldfish, and pet and livestock supplies. They could also help you with all your poultry needs: feed, incubators, medicine, and live chickens. …Right next door to one of the plushest and most luxurious entertainment destinations in Dallas.

Lone Star Seed & Floral appears to have once been Texas Seed & Floral and had been around since at least 1892. They set up shop at 1627 Elm in 1902 and remained there quite a while until they moved in January, 1927, just a few months after the top photo was taken. Here is a postcard of its earlier incarnation, with photos of the Pacific Avenue location at the left, and the Elm Street location at the lower right (the view is looking north on Ervay; the Palace would later be built immediately west of this  building, to the left of the lower postcard image, just out of frame). 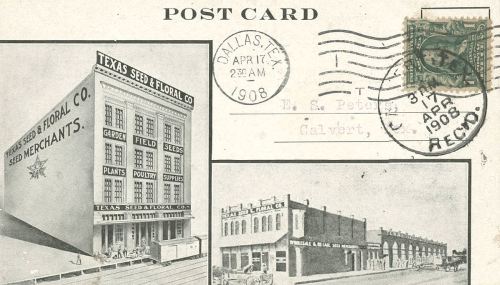 The store looks very clean and extremely well organized. My inexplicable love of things stored in card-catalog-file-like cabinets and fold-out bins tells me I’d probably be stopping in fairly regularly after having seen the latest Buster Keaton film next door.

But back to the Palace. The banner is publicizing the imminent arrival of John Murray Anderson’s “The Melting Pot,” a stage production which opened at the Palace on March 14, 1926. The Palace Theater, owned by the Publix chain, was about to embark on “a new and surprisingly different type of entertainment,” which consisted of musical revue roadshows staged in New York under the direction of producer John Murray Anderson. Each production — its performers, costumes, and sets — would be sent into the hinterlands, playing a circuit which included Dallas, the only stop in Texas. There was a new show every week. And if you missed it, you really had no excuse: there were four shows daily (five on Sunday). (Anderson was later asked by Billy Rose to help with producing Fort Worth’s Centennial celebration.) (John Rosenfield’s tepidly positive Dallas Morning News review, “‘Melting Pot’ Is Presented at Palace, Introducing New Style Film Theater Feature,” ran on March 15, 1926.)

The Texas Seed & Floral Co. postcard is from the collection of Dallas Heritage Village, via the Portal to Texas History, here.

The beloved Palace — once an honest-to-God “movie palace” was unceremoniously demolished in 1971. It had stood at Elm and Ervay for 50 years. The north side of that block is now occupied by Thanksgiving Tower. The theater and the seed store were just west of Ervay — Lone Star Seed & Floral was just to the left of where the 7-Eleven is, on the ground floor of 211 N. Ervay, the blue building seen here (the view is northwesterly from the Wilson Building across the street).