Shouldn’t there be cars?

There has been some heavy-duty editing to this post!

Here’s an interesting photo I stumbled across last night on the City of Dallas website. There wasn’t any information about it, but it appears to be a view to the east, taken from the 1400 block of Elm Street (where Exchange Place — originally Scollard Court — intersects). See what it looks like today on Google Street View here.

The main landmarks are what I call the Wilson Building Jr. (the tall dark building in the distance, located on Elm near Ervay), the Praetorian Building (the tall white building at the right, at Main and Stone), and L. W. Gentry’s photography studio in the middle of the photo at the right.

There is a sign reading “Empress” at the left. That was the Empress Theatre, which was at 1409 Elm from about 1912 to 1915. Directly across the street is a 3-story building with a sign for the Spirella Corset Parlors at 1410 Elm.

Back to the left, across the street, is the hard-to-read sign for Studebaker Bros. of Texas at 1405 Elm. Directly across the street is the new Kress Building (you can see part of the distinctive “K” from the company’s logo at the top right). Kress was at 1404-8 Elm — the building was erected in 1911 and opened that same year in November.

The “new Wilson Building” was also built in 1911, and Gentry’s took over the space above T. J. Britton’s store at Elm and Akard in 1912. And all these places appeared in the 1912 directory (except for the Empress, which was open in 1912 but might not have made the listing deadline). So I’m going to guess that this photo is from 1912 or 1913.

But this photo looks older than 1912. So many horses! The only vehicle not pulled by a horse in this photo is the streetcar. Where are the cars? In 1911, Dallas was pretty car-crazy — you’d expect to see at least ONE horseless carriage in there somewhere. It doesn’t sound like a lot, but in 1911, there were about one thousand automobiles registered in Dallas County, and the city was quickly becoming a major distribution hub for car companies (“Dallas Automobile Center of the Southwest,” Dallas Morning News, Dec. 31, 1911). (Check out this photo from 1911 taken a couple of blocks away. The only animals seen are actually riding IN an automobile!) Were cars banned from Elm Street? Seems unlikely. …I’m pretty sure I’m overthinking this.

(Ironically enough, the full entry for Studebaker Bros. which appears in the 1912 directory reads: “Carriages, wagons, buggies, street sprinklers, harness.” Nary a mention of an automobile. That arrived the following year.)

It might just be that I’ve had a very stressful couple of weeks, and it was really late when I originally wrote this. But I’ve had a refreshing night’s sleep, and I’m still fixating on this car thing. (Shouldn’t there be cars on Elm Street in 1912?) So I’m just going to stop looking at this photo, assume that it was snapped when all cars in the area were just out of frame, and wrap this thing up.

Here are a few zoomed-in details. 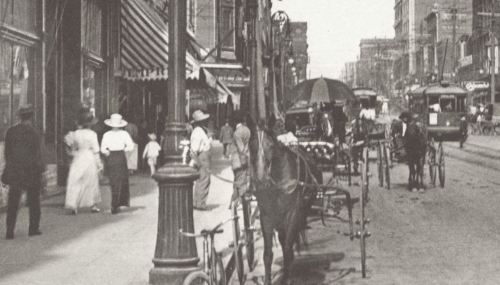 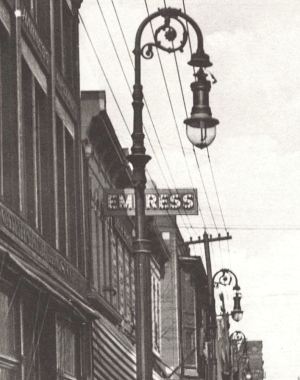 I love these decorative lamp posts (more examples can be seen in a post I really enjoyed writing, “The Grand Elm Street Illumination — 1911”).

I have edited this after seeing the reader comment below. I realized that I was basing the original location on Lemuel W. Gentry’s first studio, which was a block or two west from the one seen in the photo. (I kept saying to myself, “That building looks so much like the one the Deane studio was in.” Because… it was the exact same building!) Thanks, NotBob.

Here’s a closer shot of Gentry’s studio around 1915 — on the southeast corner of Elm and Akard, right across the street from the new Queen Theatre. (This photo originally appeared in this post.)

5 Comments to “East on Elm”