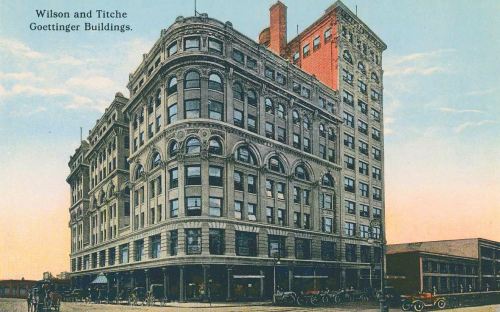 This beautiful postcard shows the original eight-story Wilson Building, built by J B. Wilson in 1902-1904, and its twelve-story companion, which was known as both the “New Wilson Building” and the “Titche-Goettinger Annex” when it was built in 1911. Remarkably, both buildings are still standing at Main-Ervay-Elm. (The view above is looking southwest, with Ervay at the left, and Elm at the right. See this view today on Google Street View here.)

The original building — surely one of Dallas’ most beautiful landmarks — was the home of the Titche-Goettinger department store (which occupied the first two floors and the basement) as well as an important downtown office building. Until seeing this postcard, I had no idea there was a porte-cochère facing Ervay (it can be seen above at the left, under the parasol-like canopy).

By 1910 Titche’s was so successful that it needed to expand, and it was decided that a new “skyscraper” would be built right next door — the department store would continue to occupy its space in the “old” Wilson Building but would also take over the new building (occupying all twelve floors!). According to The Dallas Morning News, the new building would be “the tallest structure in the South occupied exclusively by a mercantile establishment. There are only four store buildings in the United States higher than four stories” (DMN, Nov. 13, 1910).

Below are a couple of details from a “coming soon” ad from Titche-Goettinger in September, 1903, showing a drawing of the building (still under construction) from the Fort Worth architectural firm Sanguinet & Staats. (All images are larger when clicked.) 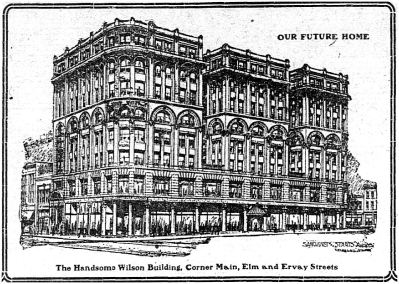 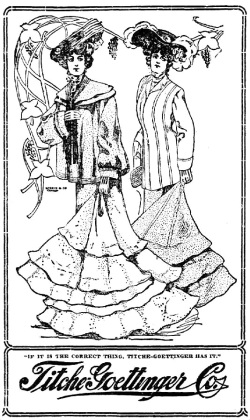 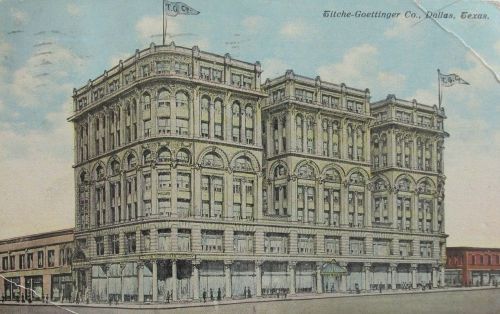 The two photos and article below ran in The Dallas Morning News on March 13, 1904 under the headline “Completion of the Great Eight-Story Wilson Building in Dallas.” The caption of the photo immediately below read “This view was taken from the postoffice, and is the first to show the entire Ervay street front.” 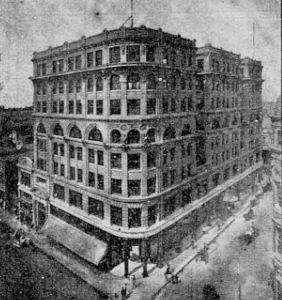 Although the quality of the image below isn’t great, it’s interesting to see this “grand marble stairway,” a feature which was removed in 1911 while the new “annex” was under construction, in order to give Titche’s even more room. The grand staircase was replaced by elevators. (The “rest rooms” referred to in the caption were more “lounge” than bathroom — a place where ladies could sit, relax, and even jot off a few letters as they recovered from their bout of intense shopping.) 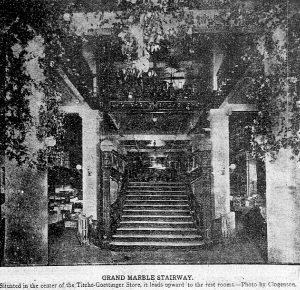 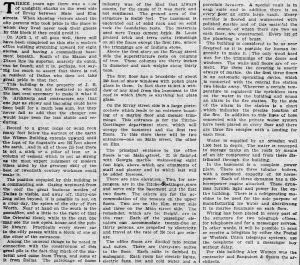 Jump forward six years to the announcement of the “new” Wilson Building:

Here it is under construction: 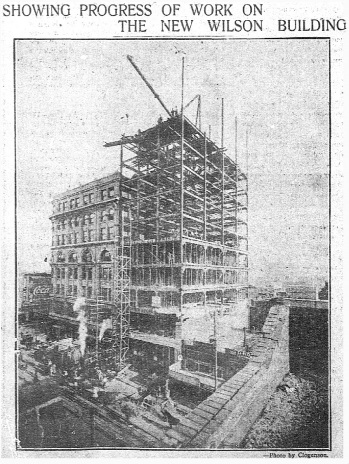 They rushed to be ready to open in time to dazzle State Fair of Texas visitors — and they made it:

And, below, the completed building, in a photo looking east on Elm (this photo shows one of the brand new street lights written about in the post “The Grand Elm Street Illumination — 1911”). (See this view today on Google Street View, here.) 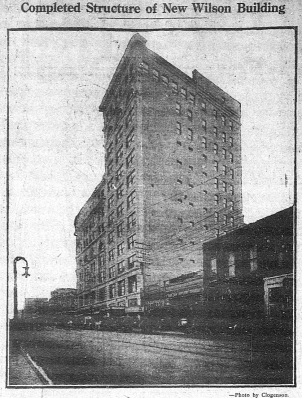 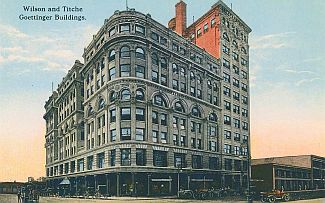 See photos of the original building under construction in the Flashback Dallas post “The Wilson Building Under Construction — 1902.”

I love looking at Sanborn maps. See what was going on at Main-Ervay-Elm in 1899 (before any Wilson buildings), in 1905 (one year after the arrival of the first one), and in 1921 (ten years after the annex went up).