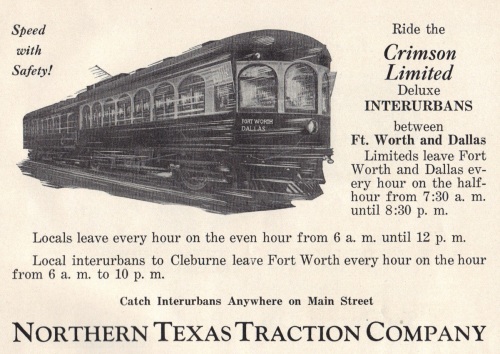 A 1930 ad for the Crimson Limited deluxe interurbans (electrified railway trains) that ran between Dallas and Fort Worth, a couple of years before the company went into receivership, put out of business by the rise of automobile culture. Even though the writing was pretty much on the walls, the Northern Texas Traction Company fought hard to reverse the decline in ridership by introducing these fancy Crimson Limited cars:

“The most notable of their moves was the introduction of the Crimson Limited in October of 1924. The Crimson Limited was the name given to the upgraded interurban service to Dallas because the cars were painted bright red. The trailer car saw the most extensive upgrades. The bench seats in the rear half of the car were removed and replaced with wicker chairs. The rear doors were converted to windows giving the car a ‘parlor car’ appearance. Additional upgrades were implemented in 1927. Although the public approved of the new more luxurious trains and more modern streetcars, they continued to abandon mass transit for the automobile.” (–North Texas Historic Transportation, Inc.) 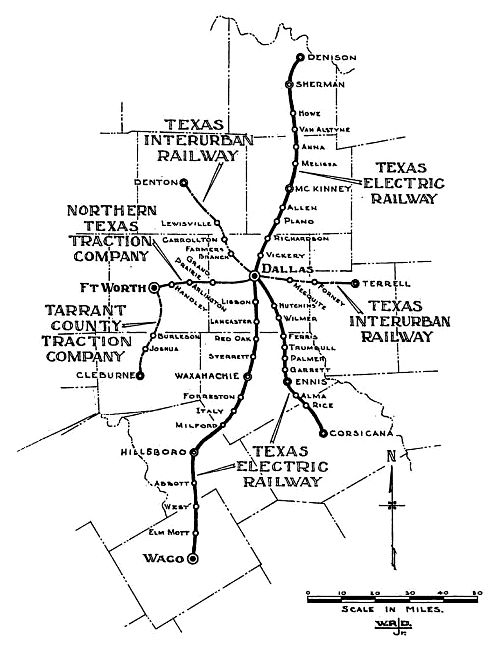 The ad is from an old magazine I can’t cite because it’s stuck in a box in a closet somewhere.

The quote is from a page on the very informative North Texas Historic Transportation site, here.

For more on this topic, check out the nice, meaty, image-filled post (which includes an ad touting the somewhat vague “Special Conveniences for Ladies”) on the Hometown by Handlebar blog, here. (Hometown by Handlebar is a really great Fort Worth history blog that might prove I was separated at birth from a twin sibling I knew nothing about!)

Not quite sure what an “interurban” is? Fret not. Wikipedia’s here to help, here.