The White Rock passenger station — the Santa Fe railroad’s first suburban train depot built in the Southwest — opened on December 5, 1955 on Jupiter Road, about a quarter of a mile south of Kingsley (located mere steps across the Garland city line), a few miles northeast of White Rock Lake. It was the culmination of a $7,000,000 construction project in which two depots were built and 49.3 miles of new track was laid between Dallas and Denton (or, more specifically, between Zacha Junction — the area near Northwest Highway & Garland Road — and Dalton Junction, an area just northwest of Denton).

The new track — touted by a Santa Fe ad as being “the longest main line construction over new territory by any railroad in 25 years” — was important because it offered passengers from Dallas the ability to travel for the first time directly to Chicago without having to change trains. It also reduced freight line distances by 65 miles. The swanky streamlined Texas Chief shuttled passengers between Dallas’ Union Station and Chicago in about 19 hours — travel time between Union Station and the new White Rock Station was 25-30 minutes.

And just wait until you see the special lounge car and dining car on the Texas Chief — the last word in luxury in railroad equipment, decorated in the style and smartness indicative of Dallas…. A lounge decorated to please a Texan! Wide open and spacious feeling, with really comfortable modern sofas and chairs, casually grouped to make you want to relax. You’ll see the Star of Texas and famous cattle brands tooled into the rich leather back-bar — and Texas-inspired murals in hand-hammered copper. Even the walls are richly paneled — in smart, new frosted walnut. Just wait until you see it, you’ll say there’s nothing like it.

Below, the Texas Chief, pulling out of the station, heading north. (To see a grainy closeup of the station in the background, click here.) 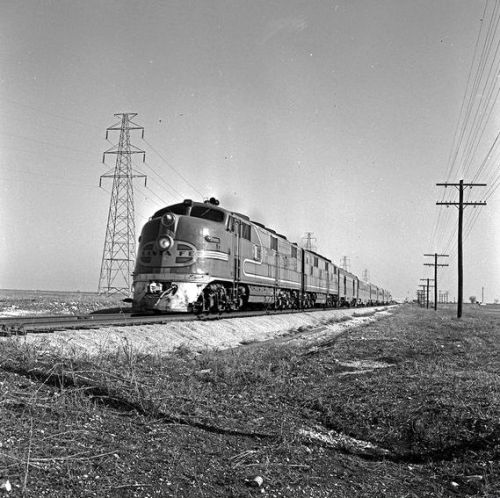 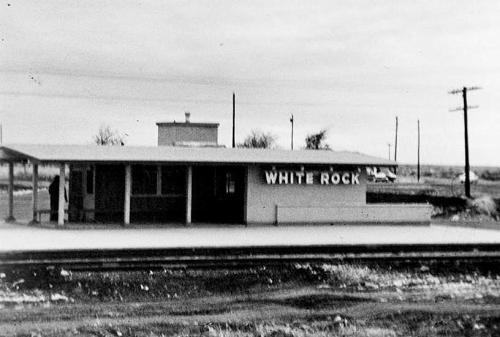 UPDATE: Watch color home-movie film footage taken at the station in this clip from the Portal to Texas History (the pertinent footage begins at the 3:00 mark). More on this cool piece of film can be found in another Flashback Dallas post, here.

And I found footage of that! Here is a screenshot of Mrs. Gurley wielding the bottle of East Dallas’ finest (as Miss Garland, Sandra Browning looks on).

And here is the short clip of the Texas Chief on Dec. 5, 1955, the day of its inaugural run from Dallas to Chicago — in color!. There are shots of the ceremonies at Union Station in Dallas, of the new White Rock Station, of the streamliner with the Dallas skyline behind it, and, possibly, footage from the other big ceremony in Denton.

The two photos showing the dining and lounge cars of the Texas Chief were taken around 1956; both are from the Museum of the American Railroad Collection, Portal to Texas History. Other photos of the Texas Chief from this collection can be seen here.

The two drawings, and a few quotes, are from large advertisements placed by the Santa Fe railroad to announce the opening of their new line.

The last photograph showing the station is dated “circa 1956” and credited to “Monaghan, M.D.”; it can be viewed on the Portal to Texas History site, here.

The photo of the commemorative railroad spike (“Spiked with Progress”) was sent to me by a man who had seen it for sale in an antique store in Ardmore, Oklahoma in 2020 (thanks, Joe!).

An article on the construction of the Denton and Dallas (White Rock) depots — “Work on New Santa Fe Depot To Start Here” (Denton Record-Chronicle, July 13, 1955) — can be read here.

For anyone doing research into this specific new rail line, there was a 16-page section in The Dallas Morning News on Dec. 5, 1955 which was bursting with helpful info, civic pride, “welcome to the neighborhood” ads, and corporate puffery. There was an even larger (MUCH larger!) tribute to the sainted Santa Fe which consumed the entire Dec. 4, 1955 edition of The Denton Record-Chronicle (there was even a ghost image of a Santa Fe engine which covered page one).

As mentioned above, there is home-movie film footage taken at the station — more about this can be found in the Flashback Dallas post “White Rock Station (And a Helicopter Ride),” here.