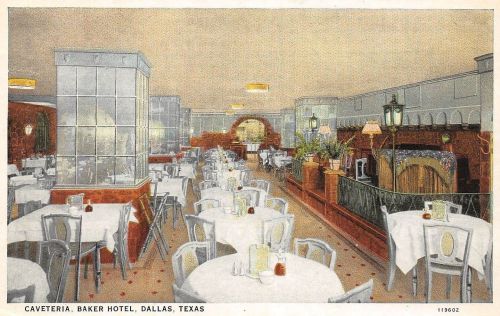 The finest in downtown basement dining (click for larger image)

How could you NOT want to dine in a restaurant called a “Caveteria”? It was a cafeteria in the basement — the cave — of the swanky Baker Hotel, and it looks like it was a nice cheap place to grab a quick lunch downtown in the 1920s and 1930s.

The Baker Hotel had “3 ways to eat”: one could eat cheap in the basement Caveteria (where, according to the Inflation Calculator, a 30-cent lunch in 1927 was the equivalent of about four bucks today), eat sort of cheap in the probably street-level coffee shop (lunch was about $6.75 there), and eat not cheap in the main hotel dining room (where lunch was over $10.00). (There was also the Peacock Terrace night club, well beyond reach of basement-dwelling diners.)

The price actually went down to a quarter by 1931 and had a “State-wide reputation for excellence.”

A year later the price was holding at 25 cents and it seems like a pretty good deal.

“The Original ‘Caveteria'” — accept no imitations! At least one other hotel in the Baker chain — the Gunter, in San Antonio — had a “Caveteria,” but apparently Dallas’ was first. In fact, the word and the hotel made their way into H. L. Mencken’s The American Language, Supplement One (see here).

Oh yeah — live bands played while you ate your hearty meal of minced beef tenderloin. Even Lawrence Welk settled in for a stint as the “musical entree” in 1934.

In 1942, the space once occupied by the Caveteria was turned over to the USO:

The Baker Hotel has provided the USO with what used to be the Caveteria in the basement of the hotel. It will be known as USO Club in the Cave. The entrance will be through the Akard Street entrance of the hotel.  (Dallas Morning News, Jan. 27, 1942)

And there it is — another place I wish I’d been able to visit.

The Baker Hotel opened in 1925 at Commerce & Akard on the site where the Oriental Hotel had previously stood, catty-corner from the Adolphus.

3 Comments to “The Caveteria: “Marvelous Food at Moderate Prices””