I realized the other day that I have an inordinate number of photographs and postcards showing Akard Street looking south — usually taken from Pacific or Elm, so I thought I’d collect them all together. Some of these aren’t dated, so they’re not in strict chronological order, but I’ve made a half-hearted attempt to make sure horse-and-buggy photos are before the men-in-straw-hat-boaters, which are before the women-in-Miss-Crabtree-dresses, which are before the cars-with-rounded-bodies. It might be easiest to just assume they are not in chronological order. (All photos are larger when clicked — a couple are really  big.)

The oldest is from 1887, when North Akard was still called Sycamore Street, and before the Oriental Hotel was built at Commerce and Akard in 1895. 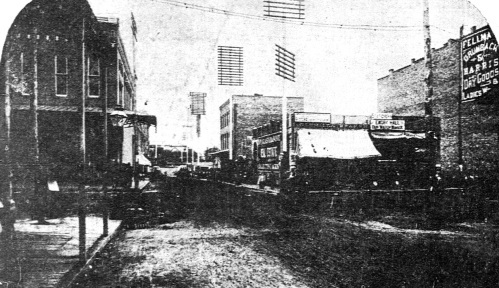 Next up, an incredible photo, taken around 1898, a detail of which appears at the top of this post. The Oriental Hotel can now be seen at the end of Akard, at Commerce, where Akard used to make a dog-leg turn before continuing south, giving the appearance of a dead-end street.

Another, with the Adolphus Hotel (built in 1912) now on the right, across Commerce from the Oriental. The tall building across Akard from the Adolphus is the Southwestern Life Building. The Gentry photography studio was at the southeast corner of Elm and Akard from 1912, which is probably the date of this postcard image. Construction of the Busch Building (now known as the Kirby Building) began in December, 1912.

From 1925, with the new Baker Hotel having replaced the Oriental Hotel. This area was now being called “the canyon district” or “the canyon.” 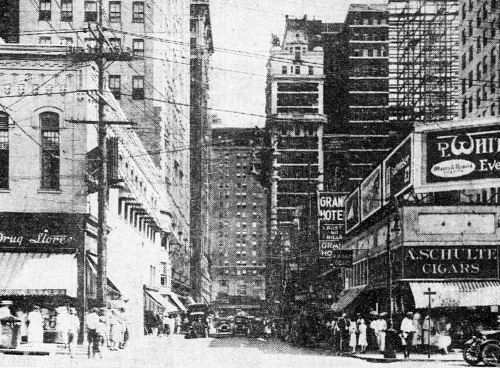 In this great Frank Rogers photo, the canyon walls are getting higher, with the Adolphus Hotel firmly anchoring the Commerce corner across from the Baker.

By the time this photo was taken in about 1936, Pegasus had become a part of the skyline, perched atop the Magnolia Petroleum Building. (Note the Queen Theater at the northeast corner of Elm and Akard.)

This photo is from the early- or mid-1930s — LOOK AT ALL THOSE PEOPLE. 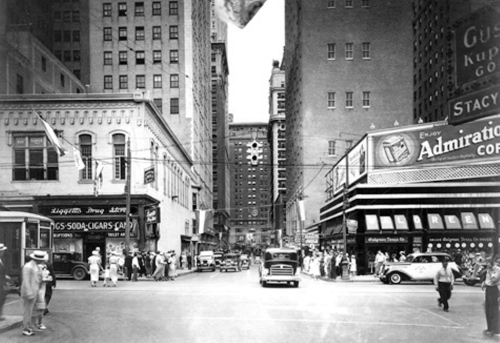 via the DMA’s Uncrated blog

As opposed to this one, which has NO people in it.

More canyon, this view showing the super-cool art-deco-y building at Elm and Akard with Ellan’s hat shop on the ground floor, late-1930s.

This candid photograph, a little deeper into the canyon, is one of my favorites. (Click to see a gigantic image.)

From 1951 — a bit grainy, but a slightly closer view of the side of the Queen Theater at the left and the Mayfair department store, built in 1946, at the right:

And, finally, today. Pegasus and the Adolphus are still there, but the Baker Hotel was demolished in 1980, replaced by the One AT&T Plaza/Whitacre Tower.

The photo dated by SMU as “circa 1898” is titled “Akard Street from Akard and Pacific Avenue Intersection”; it is from the George W. Cook Dallas/Texas Image Collection, DeGolyer Library, Central University Libraries, Southern Methodist University, and it can be viewed here.

The circa 1936 photo showing Pegasus is from the Spring, 1989 issue of Legacies — here; it is from the Hayes Collection, Texas/Dallas Archives Division, Dallas Public Library, and is attributed to Denny Hayes.

Other sources as noted.