Looking north toward Main, and beyond… (click for larger image)

A view of the dowtown “canyon” — looking north on Akard from just south of Main, published in 1962, but probably taken in 1961 — possibly from the Baker Hotel.

A few of the tall buildings which made up the walls of the “canyon“:

Adolphus Hotel — northwest corner of Commerce and Akard, built in 1911/12, designed by architects Barnett, Haynes & Barnett. The Adolphus — the oldest building in this group and the tallest building in the city when it was built — is definitely one the canyon’s anchors, but in the photo above it is mostly — if not entirely — out of frame at the left foreground. 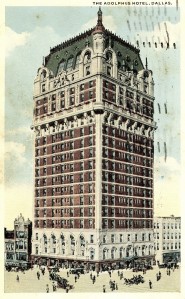 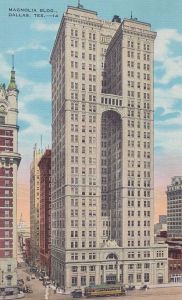 Adolphus Tower — southwest corner of Main and Akard, built in 1954; Wyatt Hedrick, architect (click pictures to see larger images). The building is currently being remodeled for office use.

Southwestern Life Building — southeast corner of Main and Akard, built in 1911/12; Otto H. Lang, architect. Bill Clements (before he became Governor of Texas) bought the building on spec in 1965, then had it demolished in 1972. It was a parking lot for many years. It is now Pegasus Plaza, an attractive open area. 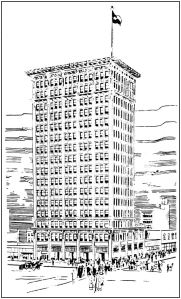 Gulf States Building — northwest corner of Main and Akard; originally known as the Marvin Building, built in 1927, with a later addition of upper stories designed by Lang and Witchell. Converted to lofts. 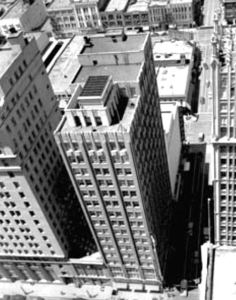 Kirby Building — northeast corner of Main and Akard. The Kirby Building — the beautiful white building at center right in the top photo — was designed by the same architects who designed the Adolphus Hotel, Barnett, Haynes & Barnett, with a 1924 annex designed by Lang and Witchell. When construction began in 1912, the building was originally called the Busch Building, named after Adolphus Busch, whose hotel was just a stone’s throw away (it was called the Great Southern Life Building from 1918 to 1922 and was renamed “Kirby” when it was purchased in 1922 by John H. Kirby). When the building opened in 1913, its most prominent tenant was the A. Harris department store, which occupied the first five floors and the basement. On December 31, 1960, it was announced that the parent company of pioneer Dallas department store Sanger’s (which, at the time of this announcement was part of the Federated Stores chain, but which had opened as Sanger Bros. in Dallas in 1872) had acquired another pioneer Dallas department store, A. Harris & Co. (established in 1892, though Adolph Harris had been in business in Dallas since 1887). The newly christened “Sanger-Harris” store settled into the old Harris space in the Kirby in 1961. It’s hard to tell, but it looks as if there is both an “S” on the corner of the building in this photo (for “Sanger’s”?) as well as the “A. Harris & Co.” sign affixed to the Akard side of the building. The A. Harris store had been a Dallas landmark at Main and Akard for almost 50 years, but it seems the sign would have come down by the time of the official change in name (which happened on July 10, 1961). So perhaps this photo was taken between January and July of 1961, when both stores were actually operating under the same roof and accepting either store’s credit card. The Kirby is now a snazzy apartment building. 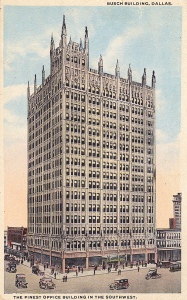 Mayfair Department Store — 1414 Elm, southwest corner of Elm and Akard. Built in 1946, this Dallas outpost of a department store chain was designed by George L. Dahl and has been converted to apartments.

Dallas Federal Savings and Loan Building  —  1505 Elm, northeast corner of Elm and Akard. This blue, gray, and white building was built in 1956/57 and was designed by George Dahl. One of Dallas’ earliest movie theaters — the Queen Theater, built in 1912 — was demolished in 1955 to make way for the new office building. (A brand new parking garage was built at the same time.) Converted to condos and apartments. 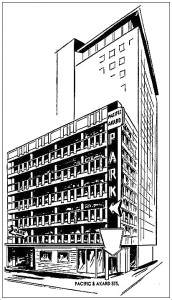 Fidelity Union Tower — northeast corner of Pacific and Akard, built in 1959/60, designed by Hedrick & Stanley; called the Mayflower Building for a short time. Now the Mosaic, converted to residences. 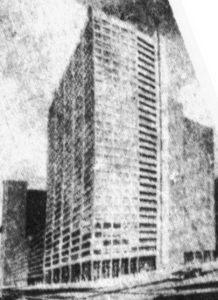 511 North Akard — between Patterson and San Jacinto, built in 1958/59, designed for the Relief and Annuity Board of the Southern Baptist Convention by architects Thomas, Jameson & Merrill. Currently apartments, with a 7-Eleven at street-level. 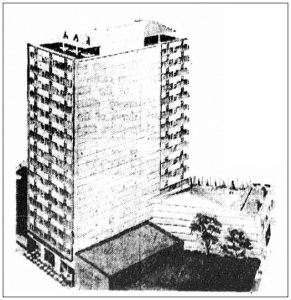 All but one of these buildings are still standing, and most have been converted into apartments and condos. The view up Akard today (here) doesn’t look as much like a canyon as it did 55 years ago, due mainly to the loss of the Southwestern Life Building at Main and Akard.

Below is a photo looking south on Akard, with the Baker Hotel (on Commerce) straight ahead. That “third wall” formed by the Baker makes things a little more “canyon-esque.” (Note the Queen Theater at the left.) 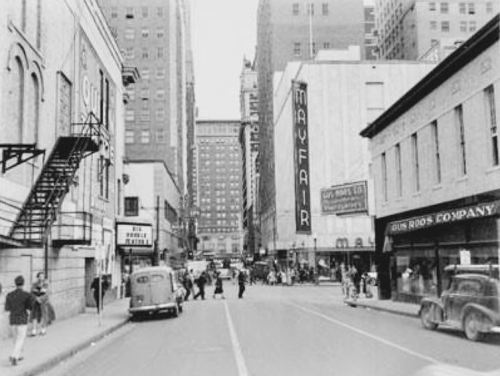 And, finally, a postcard of “The Akard Street Canyon” which tourists could share with the family back in Poughkeepsie. 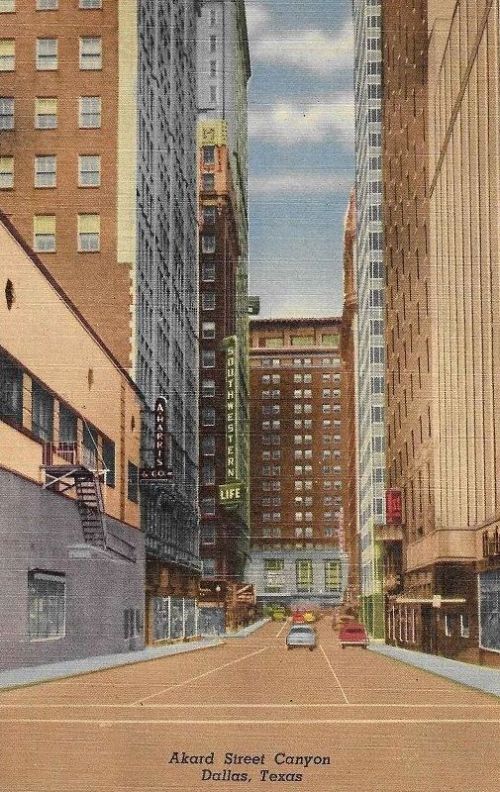 Top photo from the April, 1962 issue of AIA Journal (which is scanned in its entirety in a PDF, here).

Adolphus Hotel postcard from the Portal to Texas History.

Bird’s-eye view of the Gulf States Building from the collection of the Dallas Public Library.

Sketches and renderings of buildings mostly from ads, almost all of which appeared when the building in question opened.