Dallas in “The Western Architect,” 1914: City Buildings and Churches 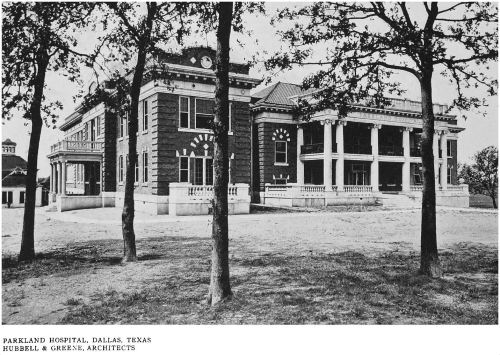 The 7-part Flashback Dallas series of buildings and houses featured in the Dallas issue of The Western Architect finally comes to an end! What I thought would be a quick and painless way to share tons of cool Dallas photos I’d never seen has turned into a seemingly endless dive into the research of a whole slew of buildings, most of which I knew very little (if anything) about. I feel like I’ve been through an immersive, three-week course in “Lang & Witchell”!

This final installment features buildings built by the city (mostly fire stations) and a few churches — six of these eight buildings are still standing. Today’s star architects are Hubbell & Greene.

1.  PARKLAND HOSPITAL (above), Oak Lawn & Maple avenues, designed by Hubbell & Greene. This new, sturdy, brick “city hospital” was built in 1913 on the beautiful park-like 20-acre-site of the previous city hospital (the old wood frame building — built in 1894 — was cut in pieces and moved farther back on the property, “across a ravine” — it was reassembled and for a time housed patients with chronic and contagious diseases and was the only institution in Dallas at the time that served black and Hispanic patients — part of this old building can be seen at the left in the background of the photo above). The new hospital was “entirely fireproof” and was built with very little wood  — other than the doors, trim, and banister railings, it was all steel, cement, reinforced concrete, plaster, and brick. The original plans called for two wings, but the city had to put construction of the second wing on the backburner until funds became available. As it was, this one-wing hospital (with beds for 100 patients) cost in excess of $100,000 ($2.5 million in today’s money). The building still stands but is barely visible these days behind a wall, trees, and dense shrubbery — it is surrounded by a huge, recently-built complex of similarly-styled buildings. (See it on a 1921 Sanborn map, here.) (All images are larger when clicked.) 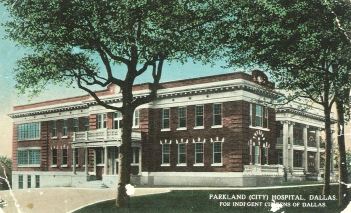 2.  ART BUILDING, Fair Park, designed by Hubbell & Greene. Known as the Art & Ladies’ Textile Building when it was erected in 1908, this domed building gave Dallas its first public art museum. No longer would the 14 paintings owned by the Dallas Art Association (including works by Childe Hassam and Robert Henri) be relegated to being displayed (when staff was available) in a room in the public library. The building was initially built as a nod to “ladies” and was the place where textile crafts and artworks were displayed during the State Fair (Texas artist Julian Onderdonk was given the task of beating the bushes in New York City for works to be loaned for display in this building during the fair). The art gallery was set in the rotunda — a sort of gallery within a gallery — while textiles and other exhibits were shown in the outer area of the octagonal building. One interesting bit of trivia about the construction of this building is that it was built largely of cement blocks — 70,000, according to newspaper reports. In order to facilitate construction, a “cement block plant” was set up on the grounds in Fair Park, turning out hundreds of blocks a day, which were then laid out to “season” in the sun. (Incidentally, this building was under construction during the historic flood of 1908 — which the newspaper refers to as “the recent high water,” and the bad weather was slowing the construction process.) The building is no longer standing, but it seems to have lasted at least through the end of 1956. It stood just inside the Parry Avenue entrance, to the left, next to the Coliseum (now the Women’s Building) — the site is now occupied by a parking lot directly behind the D.A.R. house. (See it on a 1921 Sanborn map, here.) 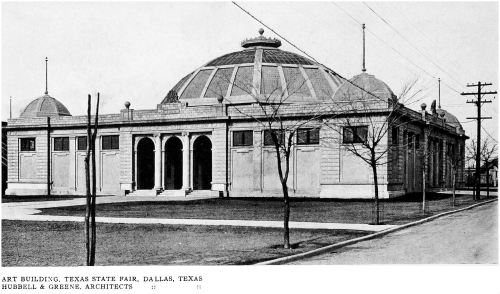 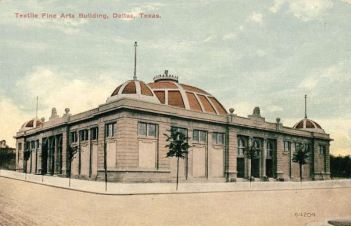 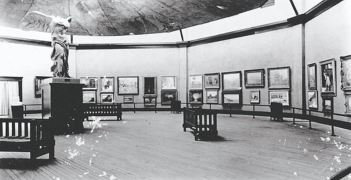 3.  CENTRAL FIRE STATION, 2012 Main Street (adjoining the Municipal Building), designed by Lang & Witchell. When Adolphus Busch acquired the land Dallas’ City Hall and central fire station sat on (in order to build his Adolphus Hotel), there was a sudden springing to action to build new homes for both displaced entities. The new location for the firehouse was in an already-standing building facing Main, adjacent to the new Municipal Building — it became the new headquarters for the Dallas Fire Department in 1913. It was, I believe, the first Dallas firehouse built without horse stalls, as it housed only motorized firefighting vehicles. The building’s use as a fire station ended in the 1920s; it was thereafter used by other municipal offices: for a while in the 1930s its third floor was used as a women’s jail, and for many years it was the site of Dallas’ corporation court. It looks like the building is still there, but I’m unsure of its current use. (See it on a 1921 Sanborn map, here.) 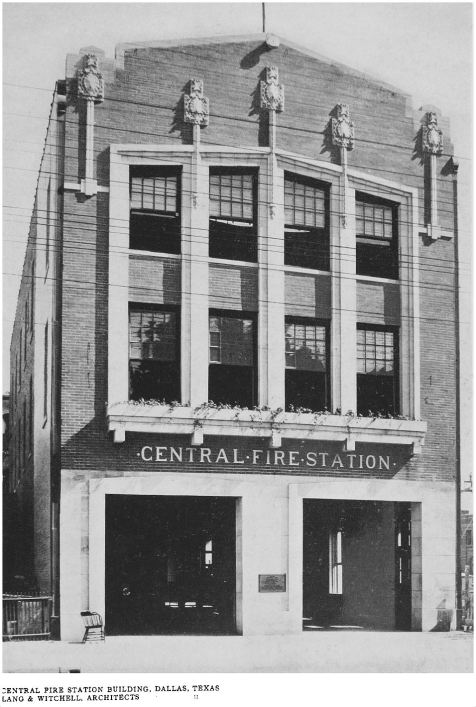 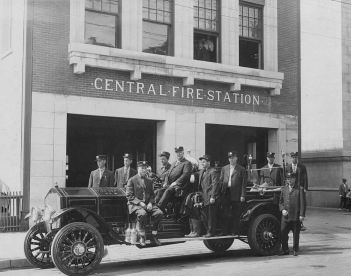 4.  OAK LAWN FIRE STATION, Cedar Springs & Reagan, designed by Hubbell & Greene. This still-active firehouse (!) — Dallas’ first “suburban” fire station — was built in 1909 as the home of No. 4 Hook and Ladder Company. When construction of the building was announced, it was described as being a gray brick structure topped by a roof of “cherry red Spanish tiling.” It was — and still is — a beautiful building. (I’ve written about this firehouse previously, here.) (See it on a 1921 Sanborn map, here.) 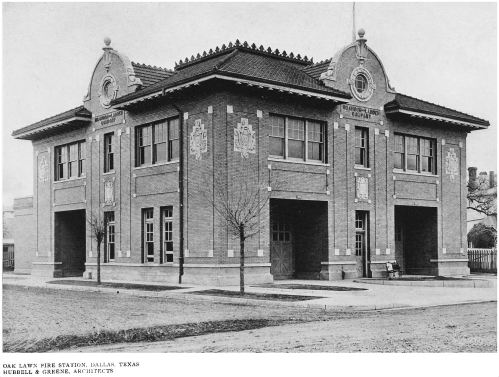 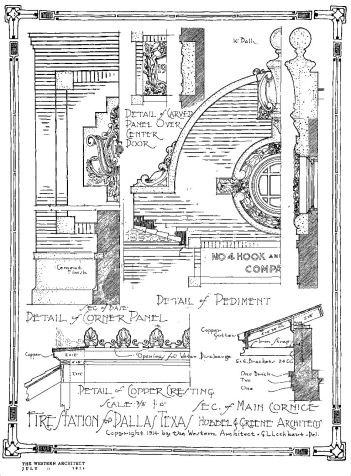 5.  NO. 6 ENGINE COMPANY, Forest Avenue (now MLK Blvd.) & Kimble, South Dallas, designed by H. B. Thomson. This South Dallas fire station was built in 1913 and was in service until 1955 when it was demolished to make way for the “South Central Expressway” (see more photos in a previous post on this, here). (See it on a 1922 Sanborn map, here.) 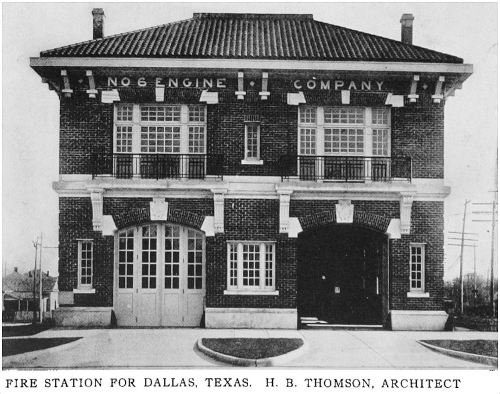 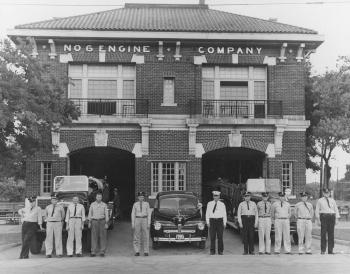 6.  FIRST PRESBYTERIAN CHURCH, S. Harwood & Wood, designed by C. D. Hill. Built in 1911-12, this impressive building boasted “the largest monolith columns in the city” (a claim which might have been surpassed by architect Hill’s be-columned Municipal Building built soon after this church, two blocks away — and rivaled by Hubbell & Greene’s Scottish Rite temple, one block away). Still standing and much expanded, the church is still looking great. (See it on a 1921 Sanborn map, here.) 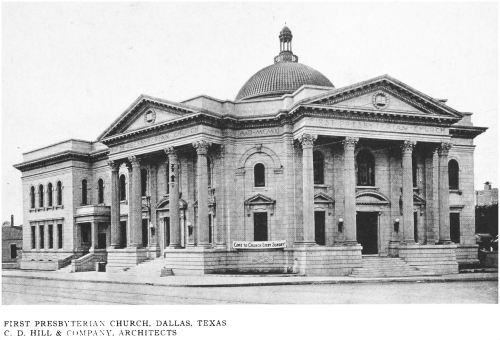 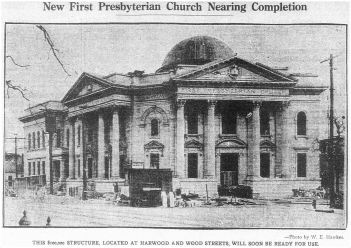 7.  WESTMINSTER PRESBYTERIAN CHURCH, 2700 Fairmount (at Mahon), designed by Hubbell & Greene. Before looking this one up, I had no idea what part of town this church was in — I was surprised to see it was in the area now known as “Uptown” … and it’s still standing. This congregation (organized in 1892) had occupied churches in the McKinney Avenue/State-Thomas area for several years before this church was built in 1910-11. When the congregation moved to their current location on Devonshire in the 1940s, the building was taken over by Memorial Baptist Church. When that congregation was dissolved, the church was given — for free! — to the First Mexican Baptist Church (Primera Iglesia Bautista Mexicana). After several decades, they, too, eventually moved to a new location, and the old church has had a variety of occupants come and go. (Read about its recent past — and see tons of photos — at Candy’s Dirt, here.) (See it on a 1921 Sanborn map, here.) 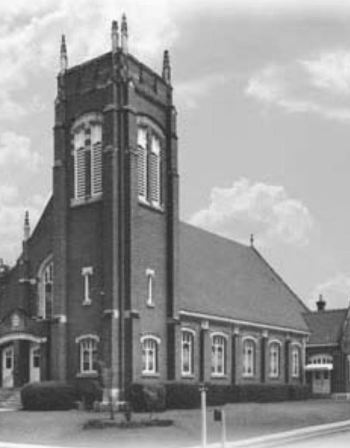 8.  FIRST CHURCH OF CHRIST, SCIENTIST, corner of Cadiz & Browder, designed by Hubbell & Greene. This Christian Science church was built in 1910 on the southern edge of downtown for $100,000 (over 2.5 million dollars in today’s money). Following its days as a Christian Science church, it has had secular and non-secular occupants. It still stands (as a lonely building in what is mostly a sea of parking lots), and it is currently a house of worship once again. (See it on a 1921 Sanborn map, here.) 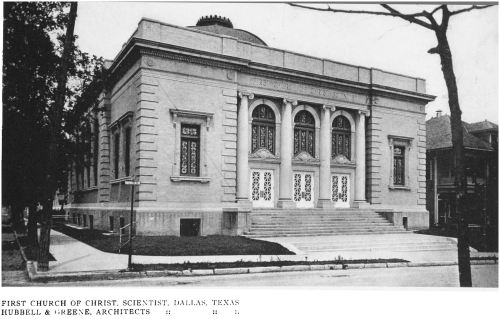 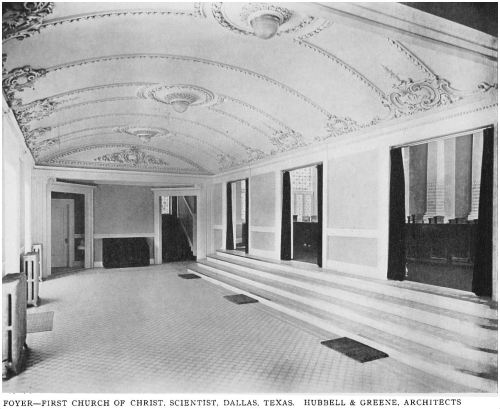 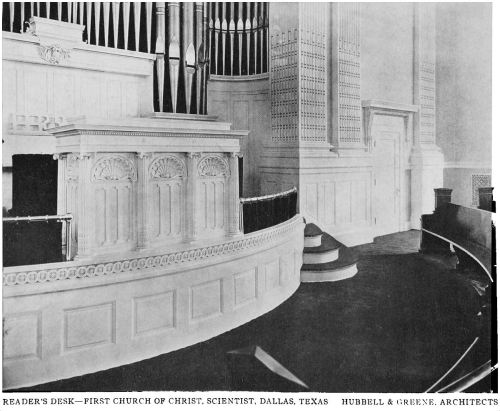 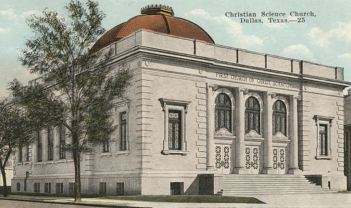 And that concludes this 7-part series featuring photos from the 1914 all-Dallas issue of the trade publication The Western Architect, which can be viewed in its entirety (with additional text), here (jump to p. 195 of the PDF for the July, 1914 scanned issue).

The Western Architect, A National Journal of Architecture and Allied Arts, Published Monthly, July, 1914. This issue, with text and critical analysis in addition to the large number of photographs, has been scanned in it entirety by the University of Illinois at Urbana-Champaign as part of its Brittle Books Program — it can be accessed in a PDF, here (the Dallas issue begins on page 195 of the PDF). Thank you, UIUC!

In this 7-part series: 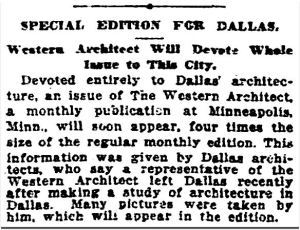 One Comment to “Dallas in “The Western Architect,” 1914: City Buildings and Churches”