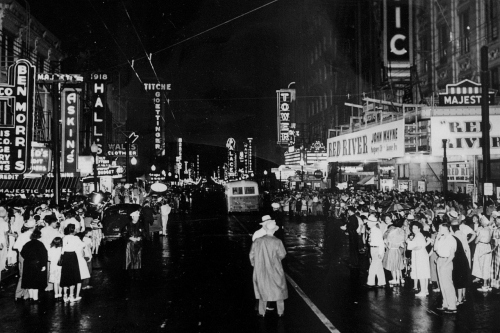 On a rainy night in August, 1948, United Artists premiered the movie “Red River” in Dallas at the Majestic Theatre. The now-classic Western about a Chisholm Trail cattle drive, directed by Howard Hawks and starring John Wayne and newcomer Montgomery Clift, was actually “premiered” simultaneously on August 26, 1948 in 250 theaters in Texas, Oklahoma, Kansas, and New Mexico, the four southwestern states most closely associated with the Chisholm Trail. 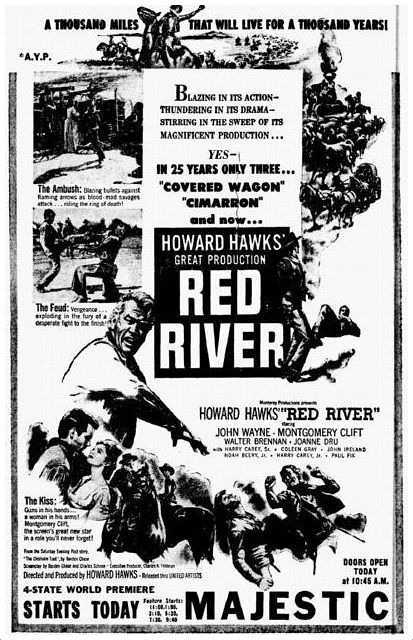 In Dallas, the publicity machine was seriously cranked up. The main attraction was a free-to-the-public street party in which the 1900 block of Elm Street was closed to traffic for a slate of western-themed festivities. The “jamboree” included square dancing, a musical set by cowboy singer Jim Boyd and his band, “cowboys and cowgirls from the Pleasant Mound Rodeo,” the Dallas Mounted Quadrille, and the Sheriff’s Posse. Or, as the ad said more succinctly, “Cowboys! Horses! Lights! Music!”

No Hollywood celebrities were there, but the big Western Jamboree was apparently well-attended, even in the rain and despite rain, people gathered for square dancing.

The movie was a huge hit, so much so that the Majestic added showings, including one at 9:30 in the morning (!). It had a record week in Dallas, and, nationally, by the end of that first week it was reported to be the biggest-grossing picture in the history of United Artists.

The “world premiere” is interesting and all, but that photo of a brightly lit-up Theater Row is even better!

The original source of the photograph is not known, but I stumbled across it on a Preservation Dallas page, here.

“Red River” is a great movie. If you haven’t seen it, you need to. Even if you think you don’t like Westerns. Roger Ebert’s review/analysis is here.