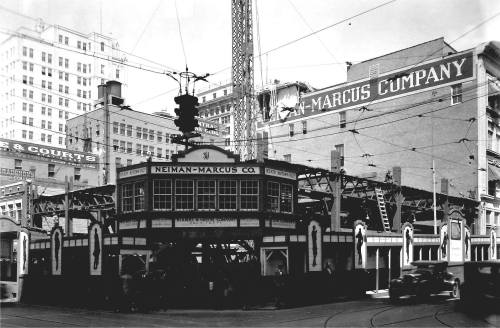 The first addition under construction, 1927… (click for larger image)

In 1927, construction began on Neiman-Marcus’ first expansion. The addition was adjacent to the famed department store, which had occupied its spot at Main and Ervay since its construction in 1914. (This was the company’s second location – their original store, which opened in 1907 at Elm and Murphy, was destroyed by fire in 1913.) The store had outgrown its old building, and expansion was deemed necessary. The new addition was designed by the Herbert M. Greene architectural firm, led by George L. Dahl. While the new building was going up, the old building was being renovated and updated.

The photo above shows the construction of the addition, which extended the store’s footprint from Main all the way to Commerce. One of the interesting features of this construction was the look of the site itself.

One of the features of the Neiman-Marcus project is the ornamental barricade, containing window boxes and fashionable silhouettes, which has been put up around the new construction. (Dallas Morning News, May 8, 1927)

The new building (which was four floors, but was designed so that sixteen additional stories could be added if needed) opened in October, 1927. Less than a month after the formal opening of this new building, another addition was announced — it opened the following year. With that “third unit” opening in 1928, Neiman-Marcus had increased its size by 50% (there would be further expansions over the years), and its sales were the highest in the company’s history. Also, notable at this time was the fact that a full 40% of the store’s sales were to people who lived “in other cities of the Southwest.”

The formal opening on Oct. 3, 1927 attracted a crowd estimated at more than 25,000 people. Invited guests wore gowns and tuxedoes. 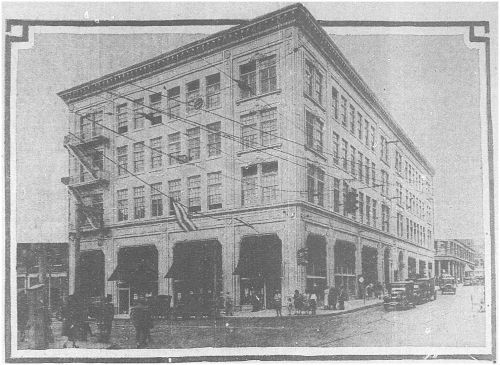 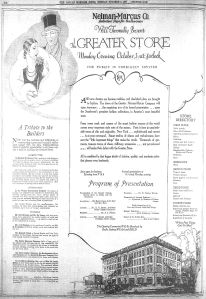 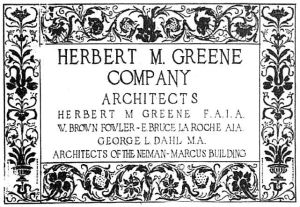 Top photo was posted in the Facebook group Pioneers of Dallas County; it is from the collection of Dallas historian Frances James.

A special section of The Dallas Morning News which coincided with the opening of the expanded store appeared in the October 2, 1927 edition of the paper; in it are several photos and articles.

Read more about the history of the Neiman Marcus building on Wikipedia, here.