The State Fair of Texas Over the Decades

The history of the State Fair of Texas is also the history of Dallas — if you live in Dallas, you know a lot about the fair, if only by osmosis. Here are a few images from the decades since the fair began in 1886.

Below, from 1889, a sedate advertisement for the Texas State Fair and Dallas Exposition (from The Immigrant’s Guide to Texas, 1889). (All images are larger when clicked.)

A great-looking poster from 1890, colorful and exciting:

A midway in its infancy, in the aughts. (I wrote about the “The Chute” water ride, here.)

Here’s a group photo showing the food vendors at the 1910 fair. No corny dogs in 1910, but plenty of candy, peanuts, popcorn, ice cream, and, sure, why not, cigars and tobacco. 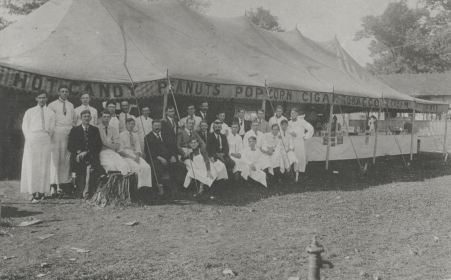 Here’s a handy 1922 map of the grounds, from the fine folks at Caterpillar (don’t miss those tractors!) — you can see where the people in the photo above are walking.

If it’s 1936, it’s gotta be the Texas Centennial — and here’s an exhibit I’d never heard of: Jerusalem, The Holy City. This was one of many exhibits at the Texas Centennial previously seen at the 1933 Chicago World’s Fair, where it apparently had attracted more than one million visitors. In the weeks leading up to the Centennial’s opening, it was described thusly: “The Holy City will contain a collection of religious artworks and other material. The entrance will represent the Damascus gate of Jerusalem. No admission will be charged but donations will be asked visitors” (Dallas Morning News, May 17, 1936). 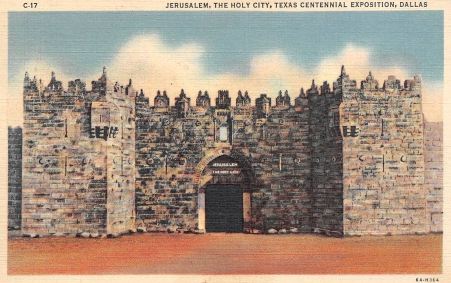 The State Fair of Texas was not held during much of World War II, but it was back in 1946, with Tommy Dorsey, Gypsy Rose Lee, and Jackie Gleason.

Neiman-Marcus was at-the-ready in 1950 with suggestions on stylish footwear for ladies wanting to trudge around the Fair Park midway in heels.

For the Million-Dollar Midway — For taking in this famous “main drag” of the State Fair — get into our famous-maker midway heel shoes. Most everybody — after walking a block or two in them — says they’re worth a million! Have all the comfort of low heels, plus the high-heel’s way of making your ankles look prettier.

The 1960s were certainly colorful, and this is a great color photo from 1961 (currently available on eBay as a 35mm Kodachrome slide) — it’s the photo at the top of this post, but in order to cut down on unnecessary scrolling, I’ll slide it in again right here: 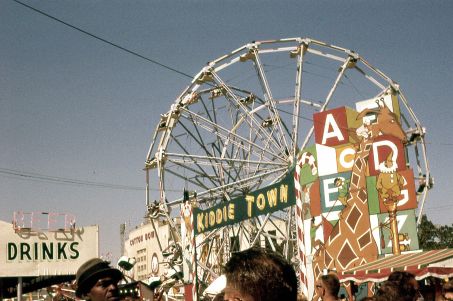 The 1970s was a weird decade, and what better way to start off a weird decade than with 80-something-year-old oil tycoon (and eccentric Dallas resident) H. L. Hunt handing out cosmetics at a booth at the State Fair? Hunt — whom Frank X. Tolbert described as “probably the world’s only billionaire health freak” — manufactured a line of cosmetics and other products containing aloe vera, the wonder elixir. Imagine seeing the world’s richest man handing out plastic goodie-bags to awe-struck passersby. Like I said, weird.

And, finally, the 1980s. A century after the State Fair of Texas began, the X-Men came to Big D to do whatever it is they do — and The Dallas Times Herald got a cool little advertising supplement out of it. (If this appeals to you, check out when Captain Marvel came to Dallas in 1944, here, and when Spider-Man came to Dallas in 1983, here.)

Sources (if known) are noted.

I wrote a similar State-Fair-of-Texas-through-the-ages post a few years ago: “So Sorry, Bill, But Albert Is Taking Me to the State Fair of Texas,” here.

11 Comments to “The State Fair of Texas Over the Decades”